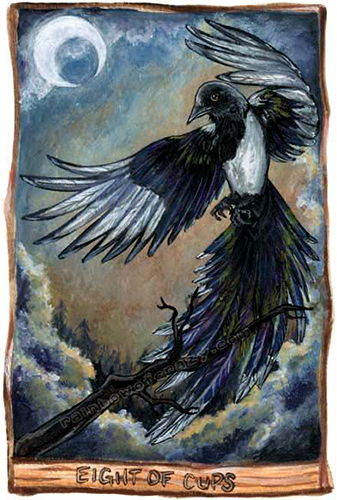 Today may see you needing to take a serious look at what (and whom) in your life you need to put behind you. You may find yourself having to make a difficult decision to let go of a situation that has not been healthy or rewarding for you.

The Eight of Cups refers to the realization that you’ve put more into something — invested more of your time, energy, heart, etc. — than you’ve gotten back, and now it’s time to face that reality and walk away.

This may be associated with feelings of disappointment and disillusionment, brought about by the realization that what you’ve worked so hard for is not going to turn out the way you’d hoped.

The Eight of Cups — this version from the beautiful self-published Animism Tarot — speaks of walking away or leaving something (or someone) behind that you’ve given your all to, and resigning yourself to the understanding that it was just not meant to be.

This should be a period of cleaning out closets, weeding unhealthy relationships from your life and letting go of fears. It can be cathartic in the sense that it forces you to look at what’s no longer working for you and to do something about it.

While you may be facing some painful realities today, the Eight of Cups reminds us that no one is immune to the twists and turns that are a part of life’s natural rhythm. And while you may not have much say in the direction the current takes you, where you end up is almost entirely in your hands.

END_OF_DOCUMENT_TOKEN_TO_BE_REPLACED 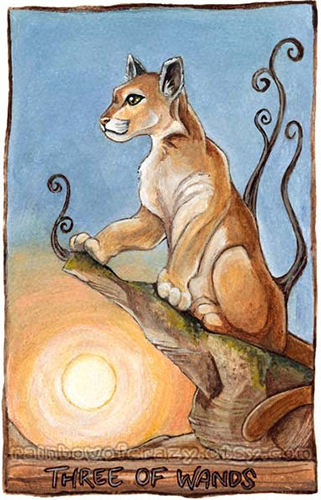 Today you want to be looking at opportunities that are presenting themselves for you to expand your horizons.

The Three of Wands says you’ve already made strides toward accomplishing important goals. And you’re probably also already starting to see the fruits of your labors.

Whether this is related to a projects in the workplace or momentum you’ve gained in your personal relationships, you can take a moment to pat yourself on the back for a job well done.

But it’s also time to look toward the future. The Three of Wands — like all Threes — acts as a bridge between the tension and uncertainty of the Twos and the structure and stability of the Fours.

With that in mind you want to think about how far you’ve come as you plan your next move.

The bobcat in this card is perched on a ledge looking out over the vast horizons before him. The Sun rises in the distance. He may have taken a moment to pause and reflect — over how far he’s come — but a new day is dawning and with it the energy and enthusiasm to keep moving forward.

You may have recently discovered that you’ve found your life’s purpose. Or you may be just now acting on aspirations that you were too afraid to reach for in the past. Either way, this card speaks of a new burst of inspiration, a second wind, and the confidence with which to see it through.

The Three of Wands encourages you to push past your limitations and expand your horizons. It will mean stepping outside of your comfort zone and exploring uncharted territories. And while you run into pitfalls or have to take detours along the way, know that these are often blessing in disguise that can open up a whole new world of possibilities.

END_OF_DOCUMENT_TOKEN_TO_BE_REPLACED 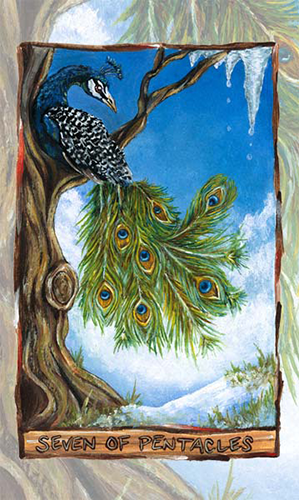 As 2014 draws to a close, it’s time to look back over last several months and think about how far you’ve come.

The Seven of Pentacles indicates a need to pause and reflect — on plans that were made and detours that have been taken along the way.

It’s about getting an overview of progress that’s been made, and evaluating the sidetracks and setbacks that may have caused you to rethink your goals.

You may feel like you’re at a cross-roads, questioning whether you want to continue with something as originally planned or consider changing direction altogether.

The Seven of Pentacles says it’s time to take a breather and rethink where you’re heading: you probably wont proceed exactly as planned but that’s because you’re wiser and have more information to work with now.

The peacock is this version of the card is perched high in the branches of a tree where she can get a clear overview of what’s taking place below her.

The wintry backdrop and the icicles accumulating on the branches tell you that not much is happening down there.

There’s a crispness and stillness in the air that makes it easier to clear your head and get some altitude as you reflect on our situation and reassess your goals.

As Venus and Jupiter come together today in a somewhat discordant aspect (inconjunct) there will need to be adjustments made. But it’s at this moment in time — as you find yourself on the precipice between where you’ve come from and where you’re headed — that you’re better equipped than ever to plan your next move.

END_OF_DOCUMENT_TOKEN_TO_BE_REPLACED 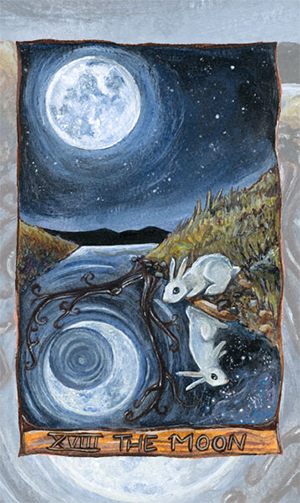 Today’s New Moon is at 0° Sagittarius. It marks the culmination of the lunar cycle, from new to full and then back again. But this particular New Moon’s theme is repeated, with both the Sun and Moon moving into a new sign (Sagittarius) at the same time.

The November Full Moon is known as the “Beaver Moon,” and while we see a rabbit in this version (rather than a beaver), it’s also called the  “Full Frost Moon” which is depicted beautifully in this card.

So is the juxtaposition between new (zero degrees) and full (the last full Moon, on November 6th), in the reflected imagery of this card. The Full Moon sits high in the sky, while the New Moon is transposed below and reflected in the icy sheen of the frozen stream.

If you look closely you’ll see that everything reflected in the stream is slightly different than it’s literal version. The Full and New Moons are obvious. But the rabbit’s reflection is inverted and the constellations around the moon become ripples in the stream. Even the stars in the night sky look like swirling snowflakes in the stream’s reflection.

This ties in to one of the main differences between the astrological Sun and Moon. In keeping with the Hermetic principles of “As above, so below; as within so without,” we understand that the Moon reflects the Sun’s light and thus represents the internal aspects of our psyches.

Traditional interpretations of the Moon card include things like confusion, doubt and uncertainty. And while some of that may be reflected here — with the paradoxical inverted reflections — there’s also a lot of clarity here. The night is crisp, the stars are bright and the rabbit is fully engaged in getting a closer look at that New Moon.

With that in mind, today is not only a  good day to think about fresh ideas, initiating projects and New (Moon) beginnings, but also good for exploring and embracing your rich inner world.

END_OF_DOCUMENT_TOKEN_TO_BE_REPLACED 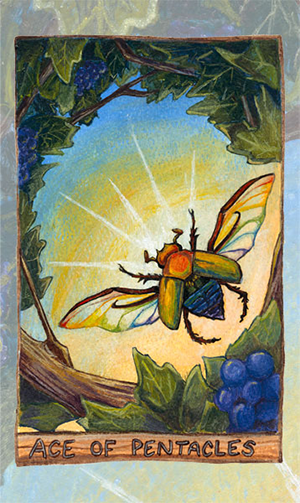 Today is a good day to be counting your blessings and focusing on attracting more of the same into your life.

The Ace of Pentacles refers to new opportunities for growth, prosperity and abundance, of which material (financial) gain is only a small part of.

It refers to planting seeds which then grow and flourish, and ultimately begin to propagate and replenish themselves — much like the grape vines framing the scarab on this card.

The Ace of Pentacles — like all Aces — is a card of assurance and inspiration. It’s a “Yes” card, a manifesting card, a card of limitless promise and potential. It’s an essence rather than a “thing,” which means you have a lot of say in how it plays out. If it’s money you want (or security, stability, comfort, etc.) now is the time to work on attracting more of it into your life.

But remember that money is called “currency” for a reason: It’s expected to flow, both to us and from us. We need to be willing to put our own resources to use if we want to attract more of the same.