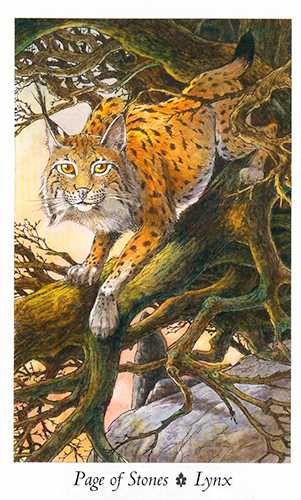 With Mercury trining Saturn today, it’s a good time to gather information that may be useful for you down the road. The Page of Stones — the Wildwood Tarot’s version on the Page of Pentacles — is known for being patient and diligent, much like the Lynx in this card.

He’s watchful and attentive but not quite ready to pounce. He relies on his instincts — and all five senses — to alert him to danger before it has a chance to strike. He’s conscious of every sight, sound, smell and movement in the wilderness around him, from the safety of his perch.

The Page of Stones is more intent on focusing and observing than he is on acting or doing: he’s not about to expend any excess energy unless it becomes absolutely necessary. Of all the Pages in the Tarot, this one is most capable of biding his time and exercising restraint.

He’s still got some growing to do. He still isn’t where he hopes to one day be. But he knows that good things come to those who wait and that he may have to conserve his energy in case he needs it later on.

He also knows that if he needs to act he can because he’s secured his position and made the appropriate preparations. He doesn’t quite blend into his surroundings but he’s compensated for that by placing himself out of harm’s way.

The Mercury / Saturn trine is similar in that it emphasizes forethought and preparation, especially as these two planets are in water signs which means they’re more primitive and instinctual than aggressive or action-oriented. This aspect is especially good for planning and information-gathering, which could serve you well today — especially if you can see yourself putting those plans into motion and acting on them down the road.