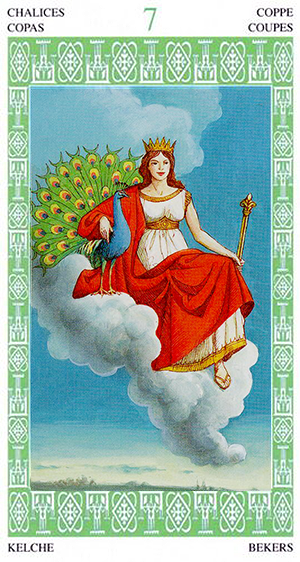 Today’s Mercury / Neptune opposition may see fighting the urge to escape into a fog of romantic reverie.

You may find yourself walking around in a haze; lost in thought or daydreaming about a different reality.

The Seven of Chalices is a card of temptations, often fueled by irrational thoughts or fantasies. There can be too many options available, which makes it hard to decide. But it can also be a case of wishful thinking or foolish day-dreaming that can interfere with actual progress.

You may feel like torn by competing interests and pulled in different directions — either away from the things you really want to do, or towards the kind of mindless diversions that cause you lose sight of your priorities.

The woman in this card — from the Tarot Lenormand — is seated on a fluffy cloud with her arm around a colorful peacock and a scepter in her other hand. She’s dressed as a Queen and she very well may be, or perhaps this is just part of her fantasy.

The Seven of Chalices compels you to escape from what may seem like a dull or ordinary existence, into a world of daydreams and fantasy. It may not be productive or practical but it can get you out of a funk.

There are elements of seduction inherent in this card. Being seduced by something intangible or just out of reach, or being lured in by a fantasy that falls short in the harsh light of day. What you long for looks so appealing while what you have appears so drab. But it’s just an illusion and even if it weren’t — even if it were perfectly attainable — it’s not going to come about by sitting around daydreaming. 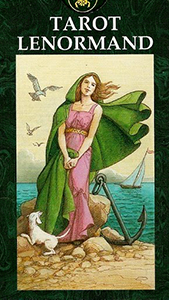 Today’s card — Seven of Chalices — comes from the Tarot Lenormand, a 78-card deck based on the Madame Lenormand oracles that were first printed in the 19th century.

The Tarot Lenormand combines the famous Lenormand oracle with Etteilla’s Thoth Tarot, and was illustrated by Ernest Fitzpatrick, who also gave us the Harmonious Tarot.

This accompanying text was written by Alma De Angelis.

The Tarot Lenormand is a a Lo Scarabeo deck published by Llewellyn.