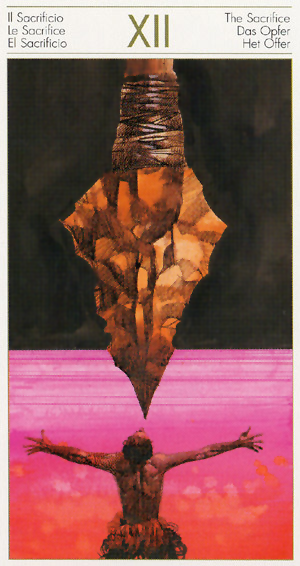 Today transits may see you looking back over the year and thinking about purging whatever has not served you well as you surrender to a greater power.

The Sacrifice card is the Tarot of the Origins version of the Hanged Man. This beautiful card illustrates the act of surrender that is traditionally associated with the Hanged Man.

The vibrant reds and oranges in this card may symbolize anger and fear (think Mercury in Capricorn square Mars in Libra). And the arrow-head pointing down from the heavens suggests that the figure in this card doesn’t have much choice in the matter.

But his posture says he’s not only open to the process, he’s ready and willing to embrace it.

The Hanged Man represents sacrifice and surrender. Obstacles and delays. And the Universe saying “no,” “wait” and “let it go.”

As the year 2015 comes to a close, you may be more prepared than ever to let go of what is just not working for you.

You may be doing a personal inventory and taking the time to look back and see what changes need to be made. In order to this you may need to put things on hold — at least long enough to assess the damages and formulate a plan for the future.

The Sacrifice card is all about surrender. Letting go and letting God. Holding back from trying to change the natural course of things because your own input could (and would) interfere with their development. And figuring out what you want to do differently in the year ahead.

The card used for today’s tarotscope — The Sacrifice — comes from the Tarot of the Origins deck by Italian artist Sergio Toppi.