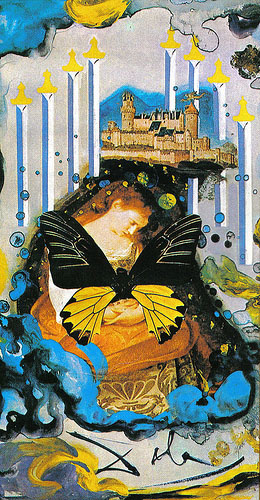 Today you may be dealing with a sense of impotence or immobility. The Eight of Swords speaks of feeling trapped, powerless, blinded by fear, unable to move or to even see that there’s a way out.

Most decks show a figure (woman usually) who is blindfolded and trapped within the confines of 8 swords. The woman in this rendition is a bit different though: here she seems almost reconciled to her immobility.

She’s slumped forward on her seat, perhaps in resignation or grieving. She oblivious to the butterfly perched on her lap or the castle in the air behind her. Instead she bows her head and looks down.

The Eight of Swords in this context is all about a sense of powerlessness brought on by external conflicts and obstacles. But it’s impossible to see it that way when you’re busy beating yourself up over it.

Consider how much of your current predicament has been outside of your control and how much has been self imposed.

It takes a lot more courage to break free from the latter than it does the former. The way out though is right there before you; you just need to open your eyes.

Today’s card — Eight of Swords – is part of the Dali Universal tarot by Salvador Dali and and Juan Llarch, and published by US Games. This deck is out of print and has become very hard to find but is occasionally available through Amazon.com.