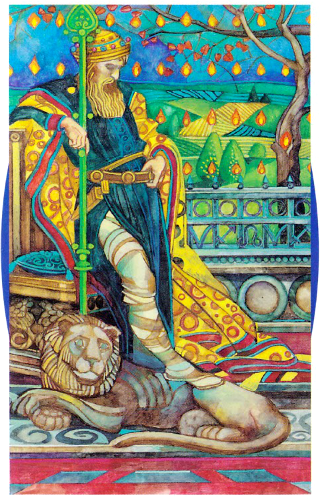 How comfortable are you feeling with your own power? The Kind of Wands is a powerful man. He is forceful and kind and likes to have his own way in all things he surveys… and who would not wish to give him otherwise for he is quite adept at whatever he sets his hand and mind to.

In this version of the King of Wands we see a figure who is quite relaxed whilst all around him everything seems to bend to his will. There’s prosperity and growth that looks as if it requires little, if any, effort by him and perhaps this is because he has others doing the hard work for him whilst he comes up with other plans.

He is a man of action but that doesn’t necessarily mean he is the one undertaking the actions for he is also a leader and may have very little patience for those who don’t do as they are told. He doesn’t need to explain himself as he knows what he wants and how to get it.

If you are on the receiving end of this type of behaviour though it may be quite frustrating, to say the least, in knowing how to perceive what his real intentions are. The King of Wands requires a strong woman to stand up to him and you don’t necessarily need to stand up to him head on. As can be seen from the lion, seemingly tamed, beneath his foot you can purr along in the shadow of his exuberance whilst he takes the lead in arranging all that needs done.

Take note though that the lion does not look as if it will for one minute put up with any bullying. It is content in its place whilst being treated well but could just as easily turn around and bite him on the foot if he gets too bossy and overbearing. And that foot could well be his Achilles heel as it is without proper protective footwear.

If you are in a situation where you perceive yourself to have no escape look for the Achilles heel… it will be there and sometimes closer than you think.

The card used for today’s tarotscope is part of the Crystal Tarot series, a Lo Scarabeo deck illustrated by Elisabetta Tervisan, and published by Llewellyn.