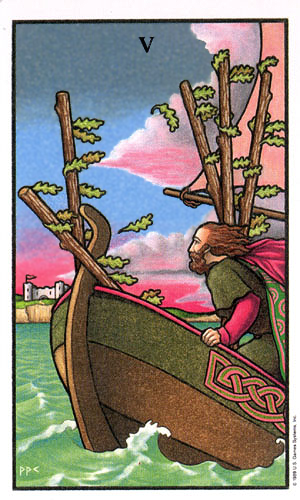 You may be feeling like you’re being tossed about in a sea of uncertainty today as the turbulence that surrounds you threatens to disrupt the calm you so desperately crave.

The Five of Wands — this version from the Connolly Tarot — can indicate a sense of feeling overpowered or ganged up on. It commands you to take control of a situation that’s creating conflict in your life.

You may be embroiled in bitter disagreements with others (the traditional meaning of this card) or — like the figure we see in this version — moving against the tide.

In this respect you may feel like you’re out of sync with the rest of the world, fighting a losing battle, or up against insurmountable odds.

The Five of Wands represents conflict, strife, obstacles and challenges. It compels you to put up your dukes and fight, but before you do you might want to ask yourself, what exactly are you fighting for?

If you’re engaged in a battle of wills with someone, you may have to look at your role in the conflict. Pushing your views on others (or refusing to acknowledge theirs) can result in your winding up alone.

If you’re involved in a power struggle, you can bet there’ll be no winners or losers, only the tattered remains of what once was a unified front. The Five of Wands encourages you to move past the chaos and calamity, and work on restoring the peace. If you can see past your pride to work with others rather than against them, it will be much smoother sailing for you from here on out. 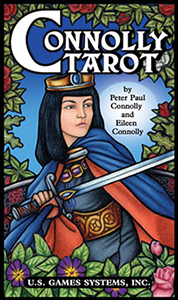 Today’s card — Five of Wands — is from the Connolly Tarot by Eileen and Peter Paul Connolly.

Eileen is a prolific writer who has penned several other tarot books and has also joined forces with her son Peter Paul on the beautiful Feng Shui Tarot.