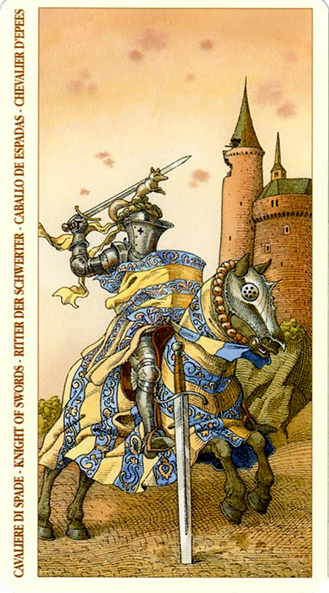 You may be feeling a sense of urgency today — to chase after your goals, deliver an important message or reach some objective that you feel time is running out for.

The Knight of Swords is a fearless and driven individual who can be so intent on pursuing his goals that he fails to see any obstacles in his way. In some ways this is a blessing in disguise: in the “what he doesn’t know can’t hurt him” vein.

But the downside of the mind-set is an inability to see what (or whom) he’s trampling over in his single-minded quest to get to the finish line.

The Knight of Swords can be aggressive and abrupt. He’s no-nonsense and no-BS and is unlikely to worry about sparing anyone’s feelings. He’s also not someone you can reason with or who will be deterred by emotional displays.

In this version of the card the Knight and his stallion are both wearing armor — and both cloaked in royal attire. The Knight raises his sword and rears back on his horse in a gesture of defiance.  A second Sword has been thrust into the ground in a symbol of triumph. The spoils of war are behind him.

He can be combative and contentious, which means that you’re not going to make any headway in getting your views across.

But he may also represent an energy or attitude that you need to learn to embrace. If you’ve been wavering in your convictions, now is the time to develop a backbone. And as the Knight of Swords also often delivers news, if it turns out that you’re the one doing the delivering today, be mindful of the tone, manner and especially your choice of words.

The card used for today’s tarotscope — Knight of Swords — is part of the Tarot of Durer series which pays homage to the German artist of the Renaissance era, Albrecht Durer. Written by Manfredi Toraldo and illustrated by Giacinto Gaudenzi. This is a Lo Scarabeo deck, distributed by Llewellyn.