Ask the Astrologers: What Do Our Transits Hold?

A client who we’ll call Anna wrote in to ask about her and her ex-lover’s current and upcoming transits.

She has been seeing a man for a year and a half before he broke up with her in late April. At the time he told her he was confused about his feelings and was thinking about someone he’d met and dated before.

Anna has some knowledge of astrology herself and has looked into each of their transits trying to make sense of things.

She concluded that the breakup was showing in both of their natal charts; yet she does understand that transits move and the energy shifts, meaning that once some of the more difficult transits lift, things may very well change.

Anna is hopeful for a reunion and whether there is a chance for the two of them to reconcile one these transits have past. Chrisalis took at look at each of their natal charts and the upcoming transits to address her concerns. Here’s her response:

Hi Anna and thank you for your question. Yes I could see the troublesome transits which you and he have just been through as well as the ones in the last week or so with his natal Mars/Jupiter being transitted by Mars alongside his Pluto being hit with the last full moon this month.

Compounding this was the full moon eclipse on April 4 which hit off your own Mars and opposed transitting Uranus and your natal Midheaven. It must’ve seemed like you both had so much going on and the slightest thing could’ve tipped either of you over the edge. I also had a sense of changes and decisions for each of you during this time.

The next few months will bring some discord too. I wouldn’t advise to try to “fix” things whilst things are the way they are just now. 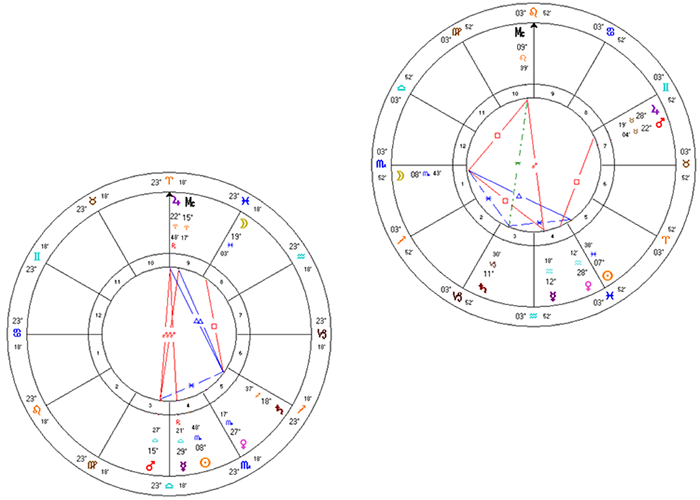 Looking at the current transits and their impact on your natal charts (above), I can see that Mercury is about to go retrograde in Gemini which is his first house so he will be pretty introspective in his thoughts/feelings at that time.

He may be doing more stopping and changing his mind without warning during this time especially as Saturn retrogrades back to his descendant through his seventh house.

Relationships will be important to him but he may also have a sense of feeling tied down which you would do well to not rock any boats on. The transit Saturn will be from now till October and it also hits off your Venus so you are looking at your own feelings of what you want in your love life alongside a time when he is feeling that any questions to do with his own life/emotions are not easily answered.

You will need to give this time and space. You both had a lot going for you and were both showing the need to reflect on what was best for each of you as well as that of the relationship as a “whole”.

I do like the way your sun is in Scorpio which is where his moon is and his Sun is in Pisces which is where your moon is. That is one intense relationship with a lot of emotional overtures in it with both of you reflecting back to the other your feelings.

For this reason too I would suggest you take a step back and a good look at what is “your’s” and what is “his” because there may be a bit of projection going on that is hard to navigate through.

Don’t look at the Saturn transit as something to be worried about. I know it is a hard thing to go through but it often brings wonderful surprises along the way.

I wish you the best!

2 comments on “Ask the Astrologers: What Do Our Transits Hold?”