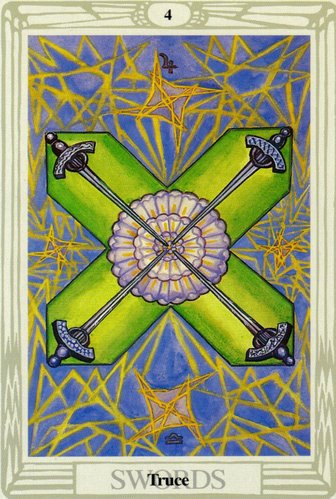 This is a good day to work on being centered and maintaining your composure in the midst of whatever life throws your way.

With an intense astrological aspect — a Cardinal Grand Cross — involving four powerful planets (Pluto, Uranus, Jupiter and Mars) becoming as exact today as it’s ever going to get, you may feel like you’re in the eye of a hurricane and when you think about it, that may be the best place to be.

A Grand Cross involves four or more planets that are all forming squares (90°) and oppositions (180°) to one another. As squares represent conflict and oppositions represent tension, these aspects can be incredibly frustrating and difficult to contain.

The Four of Swords — called “Truce” in the Thoth deck, and represents a need to bring those opposing forces into the center where they can be focused into one powerful dynamic.

While you may feel pulled in several different directions today,  you’d be best served to stay calm and carry on, rather than let yourself fall out of balance. The Four of Swords encourages you to ponder, reflect and meditate rather than “act.” It speaks of detaching from the whirlwind of activity around you and to observe rather than participate.

In this version, Four Swords are perfectly balanced from the outer corners of the card to the center where they meet in the middle of a rose blossom. They are untouched and unaffected by the images of chaos and turbulence behind them.

This is the essence of the Four of Swords, which is represented in this deck by Jupiter in Libra — the planet of expansion in the sign of peace, balance and harmony. Keep this image in your thoughts today while you go about your routine. No matter what happens around you, you’ll be one step ahead of the game as long as you remain centered and refuse to be affected by external distractions and frustrations.

The card used for today’s tarotscope is the Thoth Tarot by Aleister Crowley illustrated by Lady Frieda Harris, distributed by U.S. Games, inc. This deck is also available as an app for Android devices.