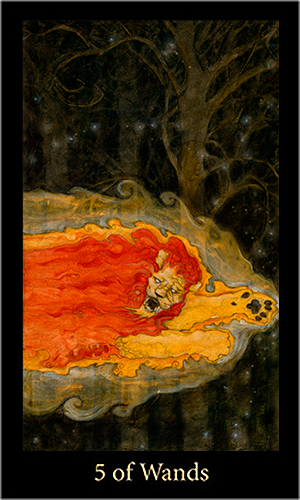 Venus squares Mars today which may result in conflicts in your relationships. As Venus — the “love planet” — and Mars — the planet associated with action and aggression — butt heads, you may feel the urge to follow suit.

Usually when it comes to the Five of Wands (and often with Venus square Mars) nobody really knows what they’re fighting about. There’s just this competitive urge to “win” at any cost, which means that in the end nobody wins.

The Five of Wands refers to conflict, strife and competition: forcing your will on others, trying to be heard above the “roar” of opposing viewpoints and struggling against cross-purposes.

In this version we see a lion charging through the thicket, undaunted by the obstacles (trees) before him. In fact he’s enveloped in a protective aura of light as he moves toward his objective. Does the aura that surrounds him insulate him from danger? Or does it obscure his own motivations and the repercussions of his actions?

Like the Lion in this card you may have to look at where you may have been pushing your views forcefully onto others. You might not even realize that you’re doing it, yet your actions can translate as pressure, at at least on some subconscious level. Petty squabbles can erupt into major arguments because no one’s actually listening to what anyone else has to say.

The Five of Wands challenges you to channel your frustrations into something productive rather than just taking them out on others. Especially since the Venus / Mars aspect narrows the definition of “others” down to relationship partners and loved ones.

As Venus is the “Love” planet and Mars is the “War” planet, you can choose which one to give power to today. Keep that in mind if you’re rather make love than war.

Today’s tarotscope — Five of Wands —  is part of the Mary-el Tarot series by Marie White, published by Schiffer Publishing.

Used by generous permission. Original art, as well as full-sized prints, are also available on her website.