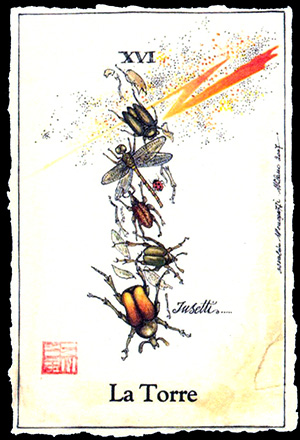 Things could be changing for you more rapidly than you’re prepared for. It may seem like your carefully constructed world is falling apart or that all that you’ve held near and dear (and previously believed was indestructible) is no longer capable of sustaining you.

This can understandably be frightening. In most traditional tarot decks the tower is a literal “tower” that has been struck by lightning and is crashing to the cliffs below. People are falling out of the structure (presumably to their deaths) while flames and smoke shoot from the shattered windows.

Yet if you consider the source of the destruction — the one earth shattering lightning bolt — you can see how it lights the whole sky, making everything momentarily clear.

The symbolism in this rendition is similar: in this version it’s a cluster of insects being struck by lightning rather than an imposing tower, but they tumble to the earth in much the same manner, losing a wing or a leg on the way down.

This is the basis of the Tower card. Plans may fall through, relationships may crumble, and cracks may start appearing all around you.

But this isn’t necessarily a bad thing. You might get banged up a bit on the way down, but you’ll also get that flash of clarity that shows you exactly what needs to be done.

The Tower card can refer to an escape from your own personal prisons and all that has been holding you back. It affords you the opportunity to wipe the slate clean and to put whatever is no longer conducive to your growth firmly behind you.

The card used for today’s tarotscope is part of the limited edition Insetti in 22 Arcani Tarocchi series by Italian artist Osvaldo Mengazzi. An android based app — Tarot of Bugs — is also available through Liberus. For more information on Osvaldo Mengazzi, visit his publishing house Il Meneghello, or “like” his Facebook fan site.