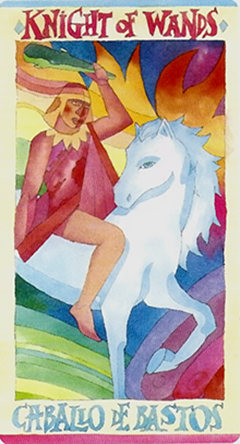 Today’s card — the Knight of Wands — speaks of mustering up the courage and confidence to pursue something you’re passionate about. It may be a life-long dream that you’ve never had the time or resources to seriously consider. Or it could be something you’ve taken a recent interest in that has you feeling inspired.

The Knight of Wands encourages you to set aside your fears and go after your goals with determination and drive. A renewed sense of enthusiasm for something you only dreamed about in the past can now propel you forward.

There’s a fiery dynamic energy about this card. The Knight is already seated on his mount, preparing to take the world by storm. The Sun is blazing in the background against a vivid rainbow sky. Even the stallion is ready to get moving; you can see it in the way he looks back over his shoulder awaiting his command. There’s nothing stale or stagnant about this card. It’s all about energy, action and pursuit.

It’s important to make preparations before you start, as there’s a bit of an act first-think later reputation associated with this card. You also want to pace yourself so that you don’t run out of steam. The Knight of Wands tends to run on adrenalin and has been known to lose interest in projects once they become routine.But overall you’ll want to challenge yourself today to set your goals in motion. If you temper them with a enough discipline and perseverance, you just may see them come to fruition.

The card used for today’s tarotscope is part of the Napo Tarot series by Argentinian author Betty Lopez and artist Napo, distributed by U.S. Games..