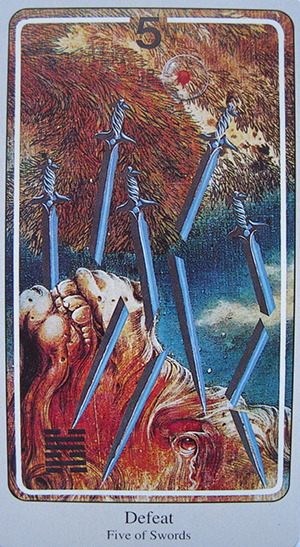 Your dealings with others today could be tense. The Five of Swords can manifest as a clash of wills or a heated confrontation that seemingly comes from out  of nowhere.

This is one of the most challenging cards in the tarot. It’s called “Defeat” in this deck, referring to the need accept your limitations rather than exacerbating problems by fighting back.

As Fives are all tied to conflict and Swords to communications, it should come as no surprise that your battles won’t be physical ones; they’ll be verbal or written. A negative review at work is one example; a ruling in someone else’s favor is another.

You could be dealing with an unreasonable partner or co-worker — or as is often the case with the Five a Swords — embroiled in legal wranglings or contractual negotiations. Whatever it is, it’s unlikely to be pleasant.

In this version of the card we see that the swords that have been lunged at their target — a stone statue of a snarling beast — have broken on impact. They haven’t even made a dent. The I Ching hexagram (47: K’un) at the bottom of the card refers to exhaustion and oppression.

While you may feel that the odds are stacked against you today, or that everyone  and everything is conspiring against you, you would do well to see the Five of Swords as a test of character. You may not be able to control what happens to you, but how you respond is entirely in your hands.

If you’re forced to accept defeat, you can do so with honor and grace. Keep the Mars / Node transit in mind as you’re sewing karma even as you reap it today.

The card used for today’s tarotscope — Five of Swords — is from the Haindl tarot, created by the late Herman Haindl with the companion book written by Rachel Pollack

. This deck was published by U.S. Games.