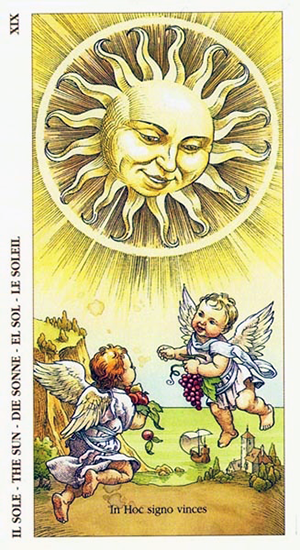 The Sun card in the Tarot is much the same way. It refers to the wonder and glory of being alive. Of feeling warm, confident, radiant and spirited. Its attitude is that “everything is as it should be” today, for you and in the world around you.

The Sun in this card — from the gorgeous Tarot of Durer — smiles down on two tiny angels hovering over a tranquil landscape. In the distance you can see a Kingdom set high on a cliff, and below it a sailboat gliding through the water.

But front and center, in the here and now, the focus is on these two little cherubs. They are “in the moment” basking in the warmth of the Sun’s glow and partaking in the earthly bounty that is theirs for the taking.

Offsite things may not be so picture-perfect. We know that there are evils in the world, poverty, sickness and war. We know that it’s not always so easy to live in the moment or be happy with what we have. And this is where the inscription at the bottom of the card — In Hoc signo vinces — comes in.

This phrase translates from Latin into “By this sign you will conquer.” It was seen in a vision by Constantine the Great and his army just before a victorious battle. Later on it was chosen as the motto for the Knights Templar. It means that while there are hardships and difficulties all around us, we do have the power to rise up and overcome.

As we move into the Solstice today and embark on a new season, take the time to think about what is right in your world. What hardships you’ve been able to overcome and what messages you’ll want to carry forward. The Sun card reminds you that there is much to be thankful for and that spreading your own warmth onto others can go a long ways toward healing our planet. 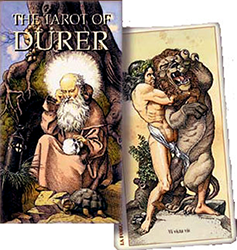 The card used for today’s tarotscope — The Sun — is part of the Tarot of Durer series.

Written by Manfredi Toraldo and illustrated by Giacinto Gaudenzi.

This is a Lo Scarabeo deck, distributed by Llewellyn.