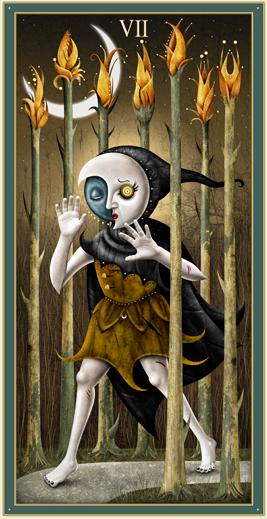 You may feel the need to defend yourself today, or to hold your ground against what feels like perilous opposition.

The Seven of Wands speaks of a need to be more alert, guarded and cautious, rather than accepting things at face value.

You may face opposition from others — in the form of competition or outright resistance.

You may feel attacked or ganged up on. You may also have to reconcile a “me against the world” attitude before it turns into a chip on your shoulder.

As with all Sevens, there’s usually a moral dilemma or a situation in which you feel you’re being asked to compromise your ideals.

This may be a friend who asks you to keep an uncomfortable confidence, an accusation that’s put you on the defense, or a situation in which you feel unfairly targeted.

Either way you’re going to be called upon to take the high road, to stand your ground and to not allow yourself to back down.

The figure in this card is braced for adversity. She’s guarded and defensive, but she doesn’t retreat: she proceeds cautiously ahead.

And while the moon is partially obscured behind the thicket, it sheds just enough light on the path to help her find her way.

Think about the areas in your own life where you’re feeling more guarded and alert. You may feel challenged or unsupported, and it may be hard to see your way around the obstacles before you.

But the Seven of Wands is a card of bravery; of standing tall, holding your ground and proceeding onward even in the face of adversity.

The card used for today’s tarotscope is part of the Deviant Moon Tarot, designed and created by Patrick Valenza. There is also a borderless version of these cards out now. For more information on his deck and to purchase them, please visit the Deviant Moon Tarot website as well as his facebook fan page. Thank you Patrick!