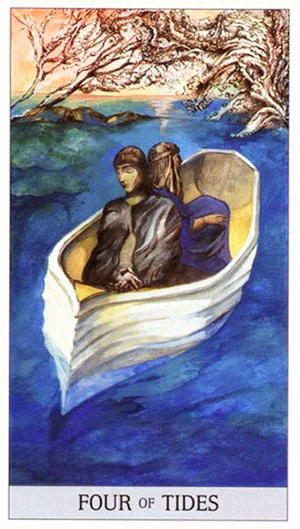 As Venus inconjuncts Neptune today, you may feel like you’re drifting along in a sea of apathy.

This card — the Four of Tides — is the Japaridze Tarot’s version of the Four of Cups. It’s a card that generally relates to disillusionment and discontent. And you can see how the couple are floating along with their backs to one another, lost in a state of reverie.

The may not even be aware of one another’s presence. They just drift along, eyes closed, not even seeing the beauty and serenity that surrounds them.

The Four of Tides can relate to a lack of motivation or a lethargy so profound that it threatens to numb you or trap you in your sense of boredom. It can have you wondering whether there might be something else out there that would excite or inspire you.

It can also relate to a lack of energy, which may mean it could turn into a lazy day where you don’t feel like doing much of anything.

One of the positive aspects of this card though is that it reveals to you exactly what’s “wrong with this picture” and allows you the opportunity to make it right. And the Venus / Neptune aspect can do the same.

It can get you thinking about how things could be — in an ideal world or at least with respect to following your dreams — and then what you can do to make those dreams a reality. While you may start out thinking “what’s the point?” you’ll have a clearer idea of what’s worth salvaging and what could use a little more work in the end. 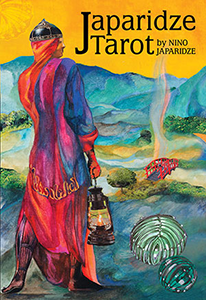 Today’s card — Four of Tides — is part of the Japaridze Tarot by Parisian artist Nino Japaridze.

Originally from Tbilisi, Georgia, Nino Japaridze is a prolific artist and painter as well as an author, lecturer and college professor.

Her work has been exhibited in galleries around the world.

The Japaridze Tarot was originally conceived and exhibited as a full-sized mixed-media paintings at New York’s Gallery of Surrealism.

The 78-card deck that was created as a result was published by U.S. Games.