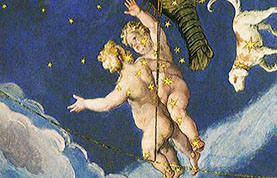 It’s time for you to let go of painful associations. You’ve probably been doing a fair job of weeding the dead wood out of your life in recent months anyway. But now with Uranus in your sign and Saturn changing direction in your relationship sector, you’ll be feeling a sense of urgency you hadn’t felt in the past. You may have been holding out and hoping that a partner would change, only to see that it’s you who’s changed. There’s no more room in your life for whatever’s been holding you back – and that includes people, material things, or outdated ideas. It’s out with the old and in with the new for you this month – as you prepare for the next chapter in your life.

This should be a fantastic money month for you as long as you keep your wits about you.  With the New Moon taking place in your house of money; and several planets moving through that area during the month, it will be your main focus.  You want to exercise caution though; this is not the time to speculate or dive into get-rich-quick schemes.  Jupiter enters your sign on the 4th, and while this can be a “lucky” transit, it’s also associated with other forms of expansion — such as travel, adventure, spirituality and education.  You’re much better off putting your energy into one of these endeavors, knowing that the returns will far surpass your efforts.  The Universe will mirror your energy back to you during this time, so pay attention to what you’re putting out there.

The Moon is in your sign for at least a portion of 6 days this month.  You start out with it conjunct the Sun, in New Moon phase (and a partial solar eclipse) on the 1st.  This is significant for you because it represents the onset of both a new lunar and solar cycle.  Your personal planets are all moving into your sign early in the month as well.  It should be overall a very instinctual, introspective time for you — where you’re focused more on your own needs than on those of others. This can mark the onset of a period of self-discovery and self-actualization — and even reinventing yourself.  It’s a powerful cycle that lasts through the month when it moves into your sign, and you emerge reborn, renewed and revitalized.

You may feel a bit out of sorts at the beginning of the month, thanks to an eclipse taking place in your 12th house.   Eclipses represent intense areas of focus for everyone, but are especially significant for Moon-ruled Cancers.   You may be feeling more sensitive, intuitive and impressionable, as this placement can increase psychic awareness.   This is not the time to isolate — even if your instincts to do so are strong.  With so many planets moving through your social sectors, it will do you good to surround yourself with loved ones rather than withdrawing into your shell. A stalled relationship gets a jump start around the 12th, but don’t expect change to happen all at once.  Let things unfold in their own time or you’ll risk losing whatever momentum you’ve gained.

Change is on the horizon for you on the career front this month, beginning around the 4th.   This should manifest as a positive change, but it doesn’t mean you’ll actually change jobs.  It can manifest in a variety of ways; such as moving to a different department, transferring to a new office, getting a promotion, or being acknowledged by your peers.  Either way it should be good news: keywords are achievement, recognition and accomplishment. By the middle of the month your social calendar fills up too.   It may be hard for some trying to juggle the demands of both of these areas, but no one is more up for the challenge than you.  Strive to keep balance in all that you and everything will fall into place.

You’re probably used to feeling undervalued for all that you do — both on the job and at home.  That’s all about to change for you this month, especially after the 9th when the Moon moves into your sign and all three of your personal planets take up residence in your career sector.  This comes on the heels of the New Moon occurring in your career house as well — at the beginning of the month.  Pay attention to your finances though – especially around the 12th when Saturn stations in your house of money.  Although this represents a change in direction for you in that area too, the wheels are likely to turn slowly.  The combination of patience and discipline will serve you well this month, so keep your eye on the prize.

You’re feeling the urge to break free from routine this month and to expand your horizons.  This can take on many forms, but is best channeled into mental pursuits, such as education, philosophical studies or spiritual endeavors.  You’ve been bogged down in research and analysis, whether it’s work-related or something more personal – like trying to understand your own inner workings. But now it’s time to move past your limitations, especially those that are self-imposed.  With the New Moon taking place in your 9th house this month, it’s going to be all about progress and personal evolution. Your transits are perfect for travel too, so consider taking off on a wild adventure or visiting a foreign country. Anything that gets you immersed in new experiences will satisfy these yearnings.

You’re not in the mood to socialize this month, or to engage in frivolous conversation.  You need time to yourself more than most people anyway, so those in your inner circle should be used to it by now.  But things can get heated between the 19th and 22nd, when a loved one becomes needy or demanding of your time. You’re going to have to figure out the best course of action: digging your heels in and refusing to budge, or stepping outside your comfort zone and accommodating someone else’s needs.  Jupiter’s moving through your relationship house now (starting on the 5th) so your best option is the latter. In the end you’ll see that giving up control is not so hard after all, and the return can be so gratifying.

What may have started as a casual flirtation can catch you off guard this month when someone unexpectedly expresses deeper feelings.  Don’t be so quick to feign surprise.  With Uranus in your romance sector and a pileup of planets moving through your relationship sector, there’s no way you’re not at least partially culpable.  Depending on how you feel about this development, it may be great news.  But if it’s not, it can turn into a very sticky situation. Your tendency is to “cut and run” when faced with awkward emotional displays.  But this can also be seen as an opportunity for growth. The important thing is to own up to your own contribution to misunderstandings that have occurred. A friendship may still be salvageable, as long as both parties are able to save face.

You’ve got a lot on your plate this month as far as work is concerned, and you probably wouldn’t have it any other way.  From the earliest days of the month you’re either working on two projects simultaneously, or putting the finishing touches on one while making preparations to start another.  Things may not fall into place until after the 12th, when your ruler turns direct.  But you’ve got a tremendous capacity for discipline and focus which is essential for what you’re trying to accomplish right now.  Try not to neglect loved ones, especially around the 21st.  A forgotten promise or special occasion can get you into hot water.  If you can fix things do so and do it right away.  By the 26th all is forgiven — as long as you’ve taken steps to make things right.

You’re not exactly known for being sensitive.  In fact most people would describe you as more emotionally detached and aloof.  But you’re likely to be touchier than usual this month, and may even be given to the occasional emotional outburst.  The theme is one of either feeling left out or let down.   And it may be partially your fault.  Because you ordinarily project so much autonomy, it’s easy for others to forget that you have feelings too.  Fortunately this doesn’t last long – you start to get your groove back around the 10th when 6 planets line up in your social sectors.  It’s wise to wait until at least that time frame to express concerns, as you’re likely to be more rational and others are likely to be more receptive by then.

You’ve got a lot more going on internally this month than you do externally.  It’s partly because you need to recharge every so often.  But can also be attributed to your ruler turning retrograde on the 3rd and 8 out of 10 planetary energies all posited below the horizon.  You’ve got a rich inner life anyway.  So this is not foreign to you.  But you’re going to be ripe with ideas, visions and psychic impressions for a good part of the month.  This is also an incredibly creative period for you, although most will be hidden from public view.  It’s all in preparation for future revelations, and is only being developed and refined right now.  Pay attention to the symbolism in your dreams too, as they can provide answers to your most pressing concerns.