Happy New Year! As we  move into 2019, we have two planets (Mars and Mercury) changing signs, a planet (Uranus) changing direction, and a New Moon (partial) solar eclipse in Capricorn.

We start the week on Monday, with both the Moon and Mars at anaretic degrees (the 29th degree of a sign) and in inconjunct aspect. The Moon is at 29 Libra (on the verge of going void of course), with Mars at 29 Pisces, as both of them prepare to change signs.

Moon / Mars aspects are generally temperamental and reactionary. And as the Moon at this time is just coming off a square to the Nodes and an opposition to Uranus (a t-square or grand cross configuration) this could follow suit, with the added need to rein in difficult emotions (the inconjunct).

Inconjunct aspects require you to make adjustments and to find a middle ground between very dissimilar energies. In this case the focus is on the signs involved — Libra and Pisces. These two signs have very different natural urges, and you may experience some internal tension as a result, but the saving grace with this aspect is that both of these signs are focused on relieving tension and smoothing things over.

Mars moves into its own sign (Aries) on Tuesday. As Mars represents what we’re passionate about as well as what we’re instinctually compelled to do, this transit emphasizes the Arian inclinations toward energy, action and drive. It’s impatient, impulsive and aggressive, but can also be somewhat reckless or inconsiderate. That’s because Mars in Aries wants to act first and think about the consequences later.

Mars will remain in Aries for about 6 weeks, during which time you can get a lot done. Mars in Aries is confident and assertive. It’s driven to make things happen and is not afraid to take risks. As Mars is dignified in Aries — the sign it co-rules with Scorpio — this will be a good time to move past your fears, put yourself out there, and go after your goals.

The Sun conjuncts Saturn in Capricorn on Wednesday, bringing with it the structure and discipline that are necessary for formulating long-term goals. If you’re making plans for the future — as most of us are at the beginning of a new year — this is a good time to do it.

The Saturn / Sun conjunction is excellent for focusing on your career goals as well; since it takes place in the sign associated with professional aspirations. Saturn is at home in Capricorn, joining Mars, Jupiter and Neptune, which are also all currently in their own native signs. And even though the Moon and Venus are both debilitated by sign, they’re also conjunct on this date (in Scorpio), which is always a nice thing.

On Thursday, Mercury squares Chiron. This transit can bring feelings of guilt and regret to the surface. You may be questioning whether you’ve done enough to help others or whether you’ve said the right things. You may also be more gullible than usual so be careful you don’t fall prey to some undeserving poser’s sob story.

Things perk up quite a bit over the next two days. First we have Mercury trining Uranus and Venus trining the North Node on Friday. This aspect is great for brainstorming and thinking outside the box. With these two planets in fire signs (Sagittarius and Aries respectively), you should be passionate about your ideas and the way that you express them.A s Uranus is the higher octave of Mercury, bringing them together in a harmonious (trine) aspect also allows for a much more natural route to that higher consciousness.

The Venus / Node trine can bring new people into your life who feel familiar and who can be instrumental to your evolutionary process. This aspect is karmic in nature, meaning that the people you meet during this time are here to propel you toward your destiny — and vice versa. Your actions and interactions can have far reaching repercussions so make sure you treat the people you meet during this time (and all times) with dignity and respect.

Also on Friday, the Sun sextiles Neptune.This aspect can increase your sensitivity to outside influences and leave you feeling more susceptible to psychic impressions. It can be just what is needed to end the work week on a mellow note — so mellow in fact that you may decide to sleep in and lounge around the house rather than venturing out.

Mercury moves into Capricorn on Saturday. This is a time for taking a more serious approach to things and for doing work on yourself. It’s a time for soul searching and letting go of painful associations. But also a time for making difficult decisions and getting very clear about what you’re capable of accomplishing from this point forward.

Also on Saturday, Venus trines Chiron. This aspect may see you becoming more aware of your own capacity for giving and for being able to put yourself in other people’s shoes. This is a charitable aspect that compels you to reach into the very depths of your soul — where compassion, forgiveness and understanding all reside — and bring forth that which is within you in order to pass it onto others. 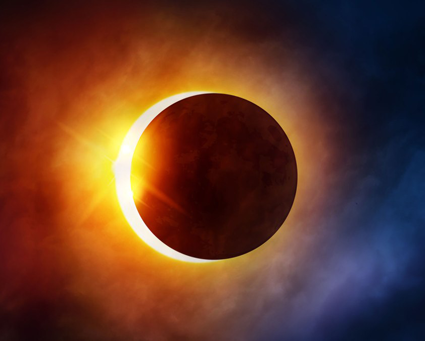 As the week winds down, we have a New Moon partial Solar Eclipse — at 15 Capricorn 25 — on Sunday.

This is only a partial (or penumbral) eclipse, but that doesn’t make it less powerful. Only less spectacularly visible.

It’s a time for looking at what’s important — or going to be important over the next 12 months — and weeding out what is no longer useful for you or conducive to your growth.

The Capricorn Moon also refers to getting serious about your goals, your profession and your public standing. Because it’s involved in an eclipse, it can act as a powerful conduit for change. The Eclipse brings a greater awareness to whatever is no longer working for you so that you can release or transform it. It brings to light that which has been suppressed or hidden — even from yourself — along with the incentive to make changes.

Also on Sunday, Uranus turns direct, creating the relatively rare phenomenon where all planets are moving in direct motion — at least for the rest of this month. Uranus turning direct — after 5 long months in retrograde motion — can bring some of those nagging rebellious urges that have been bubbling beneath the surface out into the open. Haven’t we seen enough of those in recent days you ask? Well hold onto your hats.