As we start the Chinese New Year — with a New Moon at 15º Aquarius 45′ on (on Monday in some parts of the world and Tuesday in others) — we may be thinking about ways usher in the properties associated with the Pig, which in Chinese lore is associated with good fortune, abundance, prosperity, and luck.

This particular New Moon is placed at the exact midpoint of Saturn and Neptune, which are currently in sextile and are also each at 15º of their respective signs. This creates what is called a planetary picture, with Saturn + Neptune = Sun/Moon. It adds a layer of compassion and sensitivity that can either be expressed through benevolence and altruism (in its higher form) or self-pity  and thin-skinned defensiveness. It’s obviously going to be preferable to strive for the former, and steer clear of the latter. 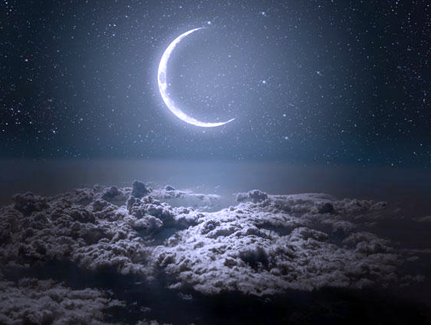 The New Moon in Aquarius emphasizes humanitarian ideals; recognizing that there’s a place in the world for all of us and that we each have something unique to contribute. It also emphasizes progress, activism and uniqueness.

It marks the onset of a period of figuring out who you are as a unique individual and what impact you want to make on the world at large.

With the Aquarius New Moon, we can expect to see people expressing more radical viewpoints and standing up for what they believe in.

This Moon is focused on individuality and personal freedoms, while emphasizing shared ideals.

By Wednesday, the Moon has moved into Pisces, forming a sextile to Venus, while Mercury semi-sextiles Pluto. The Moon / Venus sextile brings the two most feminine and receptive archetypes together, in equally feminine signs. It’s a gentle, caring and sensitive energy that may see you feeling you’re protected by unseen forces. At the same time your capacity for kindness, forgiveness and understanding are increased.

This is important because the semi-sextile between Mercury and Pluto can manifest as paranoia, intrusive thoughts or compulsive behaviors. As semi-sextiles act as instruments of transition from one sign archetype to the next, the goal should be to find ways to express the higher vibrations of each of these archetypes, which is where the Moon / Venus aspect comes in.

Mars squares the Lunar Nodes on Thursday. Planets squaring the Nodes have been known to wreak havoc, , it is said to unleash some sort of crisis, with emphasis on the concept of fate. This square is referred to by classical astrologers as “at the bendings.”  As Mars represents energy, action and drive, this can be a high energy transit that translates as combative or explosive energies.

It can manifest with people (arguments or even violence) or events (such as volatile weather and Earth changes). Fortunately there’s also a Mercury / Venus conjunction on Monday as well. This is a much more conciliatory transit, especially since Mercury is exalted in Virgo, even if Venus is in its fall there.

We have a couple more sextiles on Friday, namely Mercury / Mars and Sun / Jupiter. The Mercury / Mars sextile is great for making plans and then following through with them. It’s all about being on the same page with those you are working with and getting things done with little conflict or aggravation.

Since Mars is also applying toward a conjunction with Uranus, it’s also about being innovative, progressive and insightful. If you’re thinking about negotiating a business deal or want to get your ideas before someone who can help you turn them into reality, this is the time to do it.

The Sun / Jupiter sextile is said to be fortuitous. As the Sun represents the Self and the will, and Jupiter is the planet associated with higher consciousness and spiritual pursuits, this aspect refers to a broadening of ours minds and changing our perceptions.

Mercury moves into the final degree of Aquarius — known as the “anaretic degree — and sextiles Uranus, which is also at 29º, on Saturday. The last degree of any sign is said to be “fated” in some way, and this is especially powerful as Uranus is the higher octave of Mercury.

This transit brings flashes of insight and brilliance to the table. This is a time of tapping into your higher-consciousness. And you may be doing it without even realizing it. You might hear yourself speaking and wonder where did that come from? Or hear something that you’ve heard hundreds of times before and realize that NOW it makes sense.

This is actually an incredibly powerful combination. It’s progressive, innovative and pioneering, Don’t waste it vegging out in front of the tv. Express your ideas, speak your truth, learn something new and push your mind to its limits.

As we end the week (on Sunday), Mercury leaves Aquarius behind and moves into Pisces, a sign it’s not necessarily comfortable in but which should be a far cry less acrimonious. Mercury in Pisces is visionary, mystical and ethereal. It is very perceptive and should have you feeling more introspective and intuitive. But it’s also gullible and highly impressionable so make sure you get your facts straight before you race off down any rabbit holes.

This signature is not big on being explicit, facing reality or paying attention to details. And you find yourself being easily distracted and going off on wild tangents during this time. But the upside of a Mercury in Pisces transit is that it reminds us that we’re all floundering in the same vast ocean together, with most of us doing the best that we can. It increases compassion, sensitivity and empathy and makes us all just a little easier to get along with.