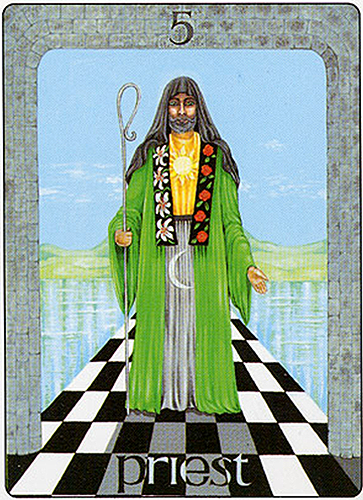 Today’s Mars / Chiron sextile could have you taking a deeper look at what you believe in, as well as how those beliefs translate to your interactions with others.

The Priest card — the Gill Tarot’s version of the Hierophant — speaks of pursuing knowledge, studying tradition, reflecting on Universal laws and principles and deciding where you stand.

There are definite religious undertones to this card, but it’s not only about religion. It’s about carrying the wisdom of the ancients forward. as a means of gaining a greater understanding for yourself. It’s also about using what you’ve learned to guide others.

This Priest stands just inside an archway between an expanse of water (instinct and emotions) and solid ground (earthly concerns). He holds a shepherd’s staff  in one hand and beckons you forward with the other.

There are repeating themes here of the need to balance contradictory energies. Apart from the water / land contrast referenced above, there’s also the prominent Sun and Moon symbols on his vestment and the lily and rose patterns on his stole. Notice also the black and white checkerboard tiles underfoot. These represent the union of polarities (both figuratively and literally).

The Mars / Chiron aspect encourages you to challenge your own belief systems and get rid of that which no longer serves you. It may be as simple as picking up a book that makes you question your pre-existing notions, and it can be as profound as a spiritual awakening that strengthens your beliefs and your relationship with a higher power.

Whatever role the Priest plays in your life — whether it’s a person (as in a spiritual leader) or a mindset (traditional ideals) — you can know that there’s a reason for questioning your values. It’s all about letting go of what is no longer useful to you (spiritually or philosophically) in order to make room for what does. 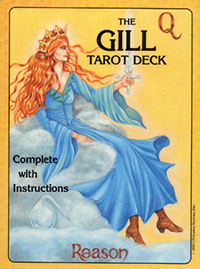 Today’s card — the Priest — is from the Gill Tarot series by Elizabeth Josephine Gill.

This deck currently out of print but can be purchased through third party sellers through Amazon, in either deck, book or combo form.

The Gill Tarot was first published in 1991 by US Games.