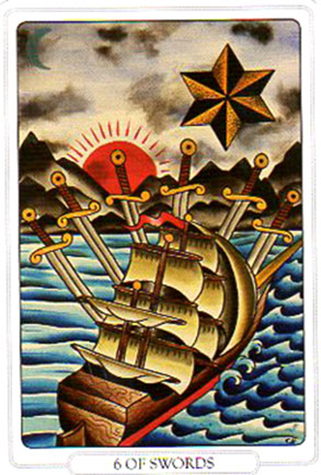 Today may be a good day to step away from your usual routine in order to get some clarity and perspective.

You may just need a simple change of scenery — getting away from it all long enough to clear your head and recharge your batteries. And you may be thinking about a much bigger change: one that involves a transition into unfamiliar territories.

The Six of Swords speaks of both moving forward and of moving in the right direction. Often it means leaving behind something that’s been holding you back and moving toward something that promises to lift you up. A better job, a better location, a better relationship. A better life.

In some versions of this card we see a man ferrying a woman and child across a large body of water. Perhaps she’s a widow: she’s hunched forward, cloaked in a shroud and appears to be in mourning. We see land on the other side, and get the feeling that they’re heading to their new home.

In this deck it’s a large ship but the meaning in similar. It steers seamlessly across the turbulent waters toward a brand new world.

The Six of Swords is often associated with literal travel, especially travel across a large body of water or even on the water, as in a cruise. But it can also relate to healing, evolution, progress and perspective. In other words, moving to a better place emotionally, psychologically and spiritually.

The deck used for today’s tarot scope is the featuring the Tarot of the Tattoo Age by Flaco Productions. The cards in this deck were each designed by a different artist. The Six of Swords was designed by Chris Howell.