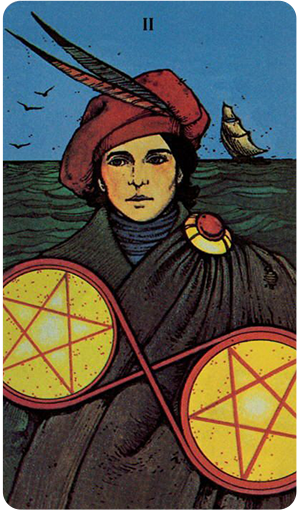 Today’s opposition pits the Sun (your ego, will, and life-force energy) against Jupiter (the planet tied to growth, expansion and personal evolution). You may be torn between these two opposing forces or you may be feeling the urge to heed the call of both.

The figure in this card — from the Morgan Greer Tarot — appears to be leaning in both directions. One on side — with his heart — he leans toward travel and adventure (Jupiter). The sea, the boat, the wind in his hair and a longing to immerse himself into the turbulent realm of emotions.

On the other side — with his head — a flock of seagulls rise and take flight. These are symbols of logic, intellect, higher mind and learning. Mind over matter. Head over heart.

While one of the giant pentacles he holds in his hands appears heavier, it’s really just an illusion — you can see that the coins are attached to one another in a lemniscate formation, illustrating the ebb and flow of one’s decisions, values and desires. As one comes up the other moves down, in an infinite and never-ending cycle.

Your job today should be to recognize these imbalances as much as it is to right them. In fact righting them will probably be secondary.

With all of the activity going on around you today (much like all of the motion in the background of this card) you want to stay on your toes. You want to remain adaptable, agile and observant. Giving into the call of one desire without neglecting the call of another should be foremost on your list.

The idea is to be alert enough to remain aware of your surroundings and flexible enough to immerse yourself in them fully. Although there are bound to be distractions and demands on your time, the Two of Pentacles says you have it in you to stay centered and attend to your obligations by pulling those opposing forces together and striking a balance between them. 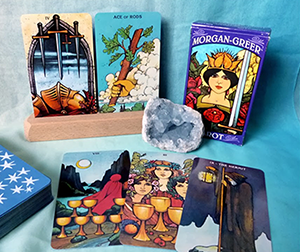 The Morgan Greer is a beautiful deck by Susan Gerulskis-Estes (Creator) and Bill F. Greer (Illustrator).

Published by US Games.

If you would like to schedule a session with either of us, there are two ways to go about it.  You can either purchase time either per minute (via Click4Advisor) or in blocks of 10-, 30- or 60-minutes (via PayPal). If we’re not showing as available, or if you want to purchase blocks of time through PayPal, please feel free to email us:
Tagged with: 2 of pentacles, morgan greer tarot, tarot, tarotscopes, u.s. games
Posted in: Daily Tarotscopes, MelandChris, Tarot, Tarot Scopes