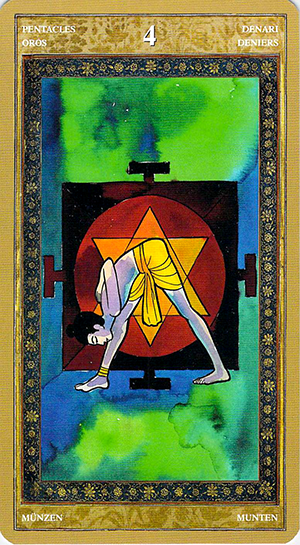 Today you may need to look at ways in which you can both expand and relax your personal boundaries. The Four of Pentacles generally refers to holding onto something (or someone) too tightly– usually due to fear.

We worry that we don’t have enough money or that a loved one may leave us, and we respond to those fears by holding on for dear life — in the hopes that we can prevent it (or them) from slipping away.

In this deck however, the imagery is quite different. We see a yogi in the  “pyramid” or parsvottanasana pose before a colorful Yantra symbol.

This posture — which requires the clarity and purpose to both extend one’s body and relax one’s mind — is a powerful remedy for the rigidity that is normally so inherent in this card. 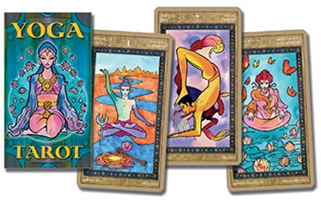 The card used for today’s tarotscope — Four of Pentacles — is part of the Yoga Tarot series, created by Massimiliano Filadoro, and Adriana Farina.

This is a Lo Scarabeo deck published by Llewellyn.