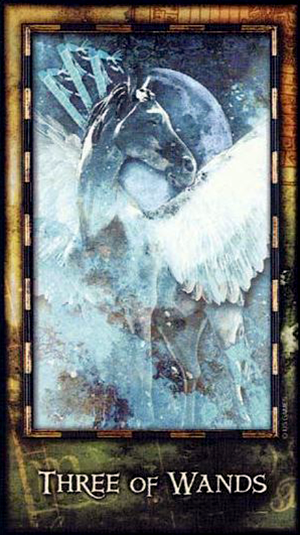 Today you’re likely to be bursting at the seams with the passion and confidence needed to put some of your biggest long-term goals in place.

The Three of Wands speaks of a renewed sense of purpose, clarity and motivation – the desire and willingness to “make something happen!”

You may already have a new project in the works, in which case you’re probably beginning to see the fruits of your labors pay off. Or you may be on the verge of launching a new project, and if that’s the case, there’s no better time than the present.

The Three of Wands embodies such a powerful life-force energy that it never permits itself to be “still.” It’s always improving.

Notice how the Pegasus in this deck is both watching over his shoulder (toward what has already been accomplished) and preparing to take flight.

There’s a nobility also associated with this card, which is befitting the majestic stance of our winged friend.

You may have recently discovered that you’ve found your life’s purpose. Or you may be just now acting on aspirations that you were too afraid to reach for in the past. Either way, this card speaks of a new burst of inspiration, a second wind, and the confidence with which to see it through.

If you’re starting something new try to inject yourself fully into it starting today, as from this point forward, you’re going to have opportunities to expand your horizons. Whether that means through travel, enterprise, education or career, the Three of Wands tells you that now is the time to spread your wings and fly!

Special thanks to Timothy Lantz, the creator of the beautiful Archeon Tarot, for his kind permission to use the images of his cards. For more information on his deck and to purchase them, please visit his website. Published by US Games.