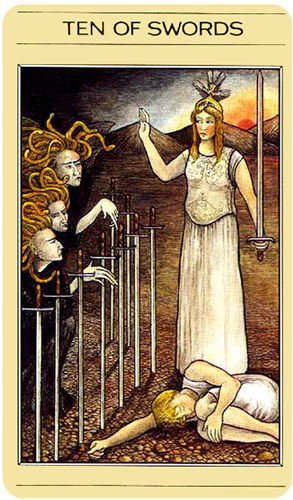 Today, with Venus opposing Pluto and Mercury squaring the Nodes, you may have to think about surrendering to the knowledge that the Universe has something different in store for you than what you’ve been holding onto.

The Ten of Swords is similar to the Death card in that it forces you to accept — once and for all — the need to put something to rest.  It could be a relationship, a job, a hope or plan for the future, or it could be a set of belief systems that are no longer aligned with your principles.

Out of all the cards in the tarot, this one best describes the process of conceding defeat and letting go of the fight — thus liberating yourself from further heartache and misery.

In this version of the card, we see the goddess Athena intervening on behalf of Orestes, who lays crumpled in a ball at her feet. He’s been relentlessly chased, taunted and tormented by the furies, avenging his mother’s death.

Orestes is not blameless here. Even though he was acting on direct orders from Apollo, he’s still committed murder. He’s beaten himself up mercilessly, and is consumed with guilt and shame. But Athena steps in and intercedes: “enough,” she says. “Enough.”

If you look closely though, you can see that while Orestes lies defeated at her feet, the sun still rises in the background.

It’s a reminder that even in the midst of being tormented by our demons — and even when we’re forced to admit that we’ve brought it all on ourselves — there comes a time for laying down our swords, giving up the fight and surrendering to forces greater than ourselves.

This is the essence of the 10 of Swords: after all you’ve been through, and all that you may have lost, there’s still a lot of life left in you, and still a new day ahead. The battle may be over, and it may have been lost; but it hasn’t been for naught.

You may have to concede that you’ve fought a losing battle, but you’ll also want to look at how it’s brought you to where you are today. Are you not now a stronger and better person as a result? A new day is dawning tomorrow — despite what you may be putting behind you today. This card speaks of liberation, triumph and victory that is yours for the taking.

Today’s card — Ten of Swords — comes from the Mythic Tarot by Juliet Sharman-Burke and Liz Greene, illustrated by Tricia Newell, distributed by U.S. Games. This deck can also be downloaded as an app for IPhone, IPad and Android devices through the Fool’s Dog website.