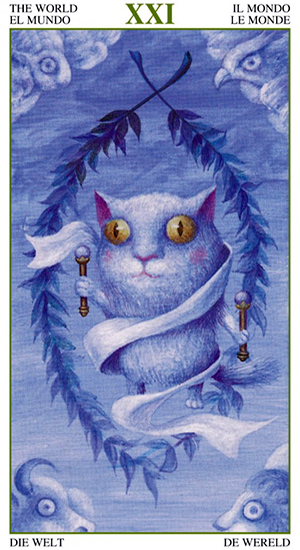 You may be on the verge of closing the door on an important chapter in your life today and preparing to open another.

The World card — called the Universe in some decks — completes the Fool’s journey and as such, speaks of fulfillment, integration and completion.

For example, you could be finishing a course or internship, tying up lose ends on a project that you’re ready to launch, putting a failed relationship behind you and getting back into the dating scene, finishing (and feeling good about) a self-improvement regimen, etc.

The possibilities are endless, but in all of the above scenarios the World card does not signify an ending as much as it does a new beginning. You’ve put something behind you in order to begin anew, a little higher up on the rungs this time.

In this version — from the Tarot of the Magical Forest — the central figure is a cat suspended in mid-air, framed by a laurel wreath and holding two wands.

In each corner of the card stands the symbol for each of the four fixed zodiac signs. The Eagle for Scorpio, the Water bearer for Aquarius, the Lion for Leo and the Bull for Taurus.

Note that all four symbols are winged as if they are there to bring out the best in the attributes of these signs and not the negatives. These four figures also correspond to the winged figures surrounding God’s throne in the Book of Revelations.

Apart from those references though, the message behind the world card is best received with insight and awareness. Ask yourself: “What is is I’ve learned through all that I’ve experienced in this chapter of my life?” and “What must I now give up in order to start anew?” If you can answer those two questions with honesty and humility, you’ll be able to carry those lessons into the next chapter.

The World card is a card of both fulfillment and completion. With that in mind, it’s time to put the finishing touches on projects that are almost finished, and also time to rest anything that just didn’t pan out for you. You’re preparing to start a whole new journey, and in doing so will want to with as clean a slate as possible.