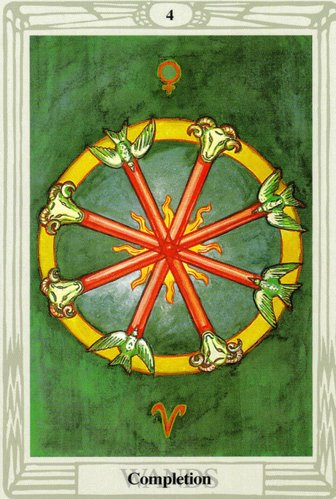 Today you may want to pause and reflect on how far you’ve come, as well as where you want to go in the next chapter in your life.

The Four of Wands represents the stage in a project (or relationship, decision, goal, etc.) where you feel satisfied with progress made and are now in the process of gathering momentum.

What was once a dream (the Ace of Wands) that evolved into a plan (Two of Wands) and starting producing results (Three of Wands) is now not only gathering steam but is showing real potential for long term success (Four of Wands),

In this version of the card, we see a gold ring with four wands crossing one another from the center and emanating outwardly like spokes on a wheel. Flames radiate in the center and the wands have alternating rams and doves at their tips.

This card is called “Completion” in this deck and is ruled by Venus in Aries — which is where Venus will be later today. Although Venus is said to be in detriment in Aries (as the sign opposing its ruling sign Libra), there are many positive attributes to this archetype, most notably the dynamic Aries impulse to keep things moving.

Some call this the “wedding ring” card; and in many decks the imagery refers to a wedding celebration taking place. In this context, the symbolism in this version works very well. Think of the rams and doves as harmonizing masculine / feminine or yin / yang energies.

The Four of Wands speaks of progress, moving toward a better future and taking things to the next level. A romance becomes a relationship; a job becomes a career; a house becomes a home.

It’s loving what you do and what you create and having absolute faith that the Universe will support your efforts. You have seen real results and can now take a step back and be gratified in the knowledge that your efforts are paying off.

The deck used for this month’s Tarot Scopes is the Thoth Tarot by Aleister Crowley illustrated by Lady Frieda Harris, distributed by U.S. Games, inc.
Check out more daily tarot scopes or visit our Shop.