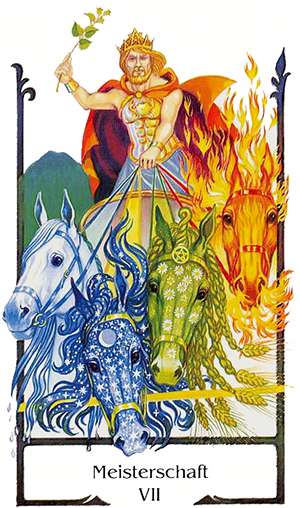 You may be in for a bumpy ride today — especially in the romance department — with Mars still squaring Neptune and Venus squaring Uranus.

The Chariot card — this version from the beautiful Tarot of the Old Path — refers to internal upheavals that threaten to manifest externally, such as an angry outburst or emotional display. It challenges you to “pull it together” and exert control over your own internal conflicts.

The Four stallions in this card represent the four elements, as do their corresponding reigns. The first one on the left is Water with a pale, translucent (and watery) mane. Next is Air, with a crescent moon and smattering of stars. Then there’s Earth with the pentagram, wildflowers and wheat chaff main. And finally the Fire element horse with the flames surrounding him.

The Charioteer in this card is also loaded with symbolism. He wears a pentagram (symbol of ascended man) on his crown and a Crab (for the zodiac sign Cancer, which the Chariot is associated with) on his breast plate. He holds a hazel wand in his right hand, the wand best used for divination.

The Four stallions appear to be moving in relatively the same direction but you can see that each has a mind of his own. It will take a lot more than sheer force of will to contain them and keep them working as a team.

It will take discipline and restraint to keep them on track and moving in the same direction. Otherwise there’s some danger of spinning your wheels without really making any progress. The Venus / Uranus and Mars / Neptune squares can make it even harder to keep things under control.

You’ll have to work hard if you want to rein in all of that energy, and this is the essence of the Chariot card. It’s the understanding that all parts of any “machine” have to operate in harmony in order to be effective. If you’re willing to embrace that philosophy — and if you can stand up and take hold of the reins in your own life — you can accomplish anything. 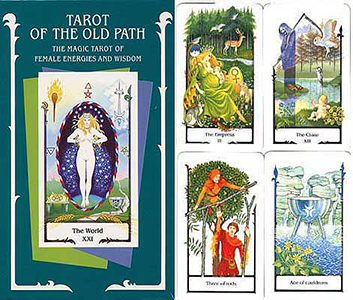 Today’s card — The Chariot — is part of the Tarot of the Old Path series.

This deck was created by Sylvia Gainsford

Sylvia also gave us the us the beautiful Tarot of the Northern Shadows.

This deck was published in 1992 by US Games.