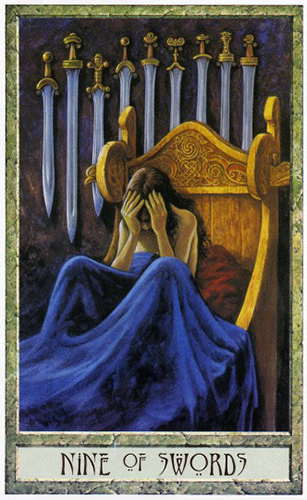 Mars squares Neptune today and may have you wondering what is real and what is all in your head.

The Nine of Swords is sometimes referred to as the “nightmare” card, due to its association with overblown panic and fear.

Often these are self-imposed: as in having gotten into a predicament of our own doing and now being forced to deal with the consequences. There’s sometimes a sense of impending doom associated with this card, also self-created.

You may be feeling a bit more anxious and unsure of yourself or have a hard maintaining your footing. Or — like the figure in this card from the gorgeous Druid Craft Tarot — you may just feeling like pulling the covers back over your head rather than getting out of bed and facing reality.

You may be feeling a bit wobbly and unsure of yourself as your fears can get in the way of making rational decisions. Either the fear is real and you brought it upon yourself, in which case you now have to deal with the repercussions of your actions; or the fear is unfounded and you’re being forced to own up to whatever it is inside of you that has created it.

You may have created a situation — or contributed to one — yourself that now has you terrified of potential consequences. You may feel like running away from your problems, or pulling the blankets up over your head again and pretending that none of it is real. But you’ll find that not confronting your demons and tackling the situation head on only makes them more harrowing.

This is the essence of the Nine of Swords. Not only do our fears have the capacity to paralyze us, but finding the courage to face them has the capacity to extinguish them. If we want to move forward, we’ll have to be brave enough to “take back our power” and face our fears head on. 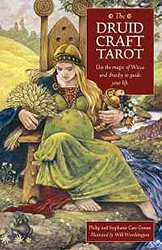 The card used for today’s Tarot Scope — Nine of Swords — is part of the the Druid Craft Tarot series.

This deck was created by Philip Carr-Gomm, Stephanie Carr-Gomm and Will Worthington.

The Druidcraft Tarot is published by St. Martin’s Press.

This deck is also available for iPhone/iPad and Android devices through the Fool’s Dog website.