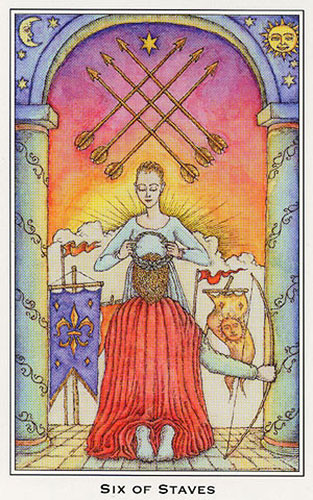 Today is a day of rewards and validation. It’s a day of being recognized for all that you’ve accomplished on the job or in your personal relationships.

You may have been putting a lot of effort into your work and not even realizing that others have taken notice. Or you could be unexpectedly pulled aside by a loved one, just to tell you how much you’re valued.

While the external props may not be as dramatic as they are in this card — from Nigel Jackson’s beautiful Medieval Enchantment Tarot — you’re bound to be seen as someone that people want to know and get close to.

The Six of Staves is a card of appreciation and admiration. You “win” something and have earned the right to be satisfied with the spoils of your victory. This isn’t about ego or conceit and it’s never at someone else’s expense. There’s a strong sense of being supported and lifted up by others who rejoice right along with you.

You could be in line for a promotion or award at work. You could be given the ok to go ahead with a project you’ve been excited about. Or it may be as simple as pat on the back and some words of encouragement by those who look up to you.

Whatever form this takes for you today, know that you’ve earned it and that you deserve it. It may just give you the incentive to keep shooting for the stars and manifesting your highest goals. 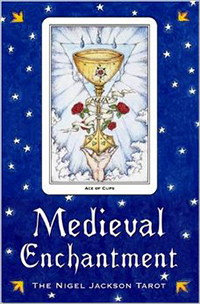 Today’s card — Six of Staves — is part of the Medieval Enchantment Tarot series by Nigel Jackson (who also gave us the Rumi Tarot and other esoteric works).

This deck was published by Llewellyn and is currently out of print.

Here’s an interesting interview with him by the American Tarot Association.