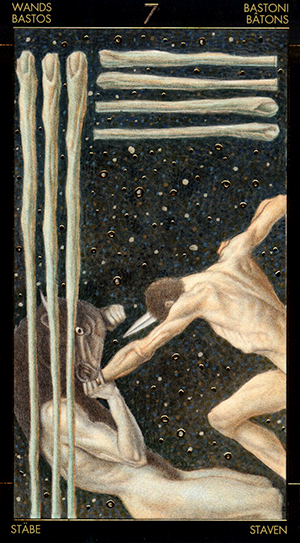 You may feel as though you have your back against the wall today as you struggle to maintain your principles.

This could relate to something you strongly believe in, such as a political or religious stance. If so, you may feel attacked by others and forced to defend your views.

It can also be an altercation that’s been in the making for some time; the culmination of “bad blood” that’s been bubbling to the surface and finally comes to a head.

Either way you are going to feel the need to stand up for yourself, even if it means angering someone else in the process.

You may feel attacked or ganged up on and will have to reconcile a “me against the world” attitude before it turns into a chip on your shoulder.

The Seven of Wands — this version from the gorgeous Golden Tarot of Klimt — also refers to a need to be more alert, guarded and cautious, rather than accepting things at face value.

This is not the time to rest on your laurels. You’ll want to be braced for attack as your views are more than likely going to rub some people the wrong way.

This doesn’t mean you need to be aggressive or combative. It’s actually just the opposite. You need to adopt a defensive posture in order to deflect the daggers that will more than likely be flung your way. 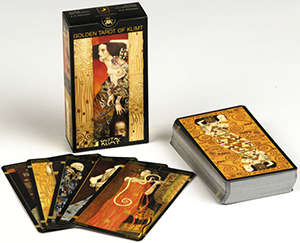 Today’s card — Seven of Wands — is from of the Golden Tarot of Klimt.
This deck was designed by Atanas Alexandrov Atanassov and features the artwork of Gustav Klimt
This is a Lo Scarabeo distributed by Llewellyn.
Here’s a great review of the deck, from the Llewellyn Encyclopedia.