The New Moon on Sunday is part of a grand mutable cross involving six planets: the Sun, Moon, Venus, Jupiter, Saturn and Neptune. The Sun, Moon and Venus are all conjunct at 14° Gemini, opposing Saturn and squaring both Jupiter and Neptune (which are in opposition to one another).

Starting with the New Moon (and conjunction to Venus), the Sabian Symbol for this degree is: “Two Dutch Children Talking to One Another Exchanging Knowledge.” This symbol is so fitting of the Gemini archetype, which is not only about communicating and exchanging information, but is also associated with language and children.

With the New Moon taking place at this degree — and with the Sun and Moon both conjuncting Venus, the emphasis is on pleasant and conciliatory communications. It’s on sharing information and developing a comfortable rapport with others. It’s about connecting with like-minded people, engaging in pleasant conversation and bouncing ideas off of one another.

Oh but if it were only that simple. Remember this is all part of a much more complicated configuration — called a “Grand Cross,” wherein several planets (always at least 4) are in hard aspect to one another, with two oppositions and four squares. Here’s what it looks like (without any of the other planets displayed): 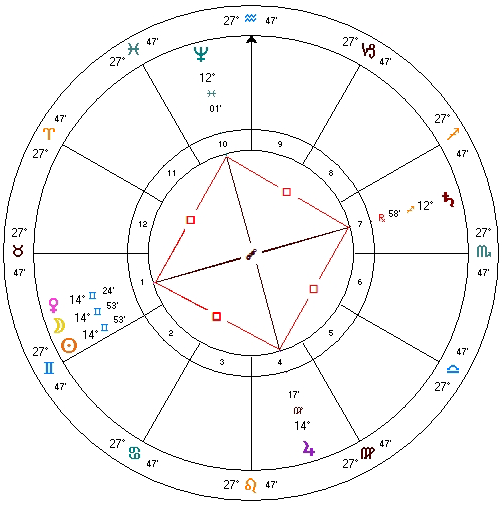 In this case, with the Sun/Moon and Venus squaring Jupiter (the urge to overdo things, and to let your enthusiasm and optimism run away with you); squaring Neptune (the desire to escape, to get away from it all, and to immerse yourself in poetic, romantic or religious reverie); and the opposition to Saturn (the

As you can see in the calendar below, the only exact aspect on Sunday is Venus square Jupiter. These are known as the lesser and greater “benefics,” meaning they’re easy planets, and that even in hard aspect (like a square) their influences are relatively positive. Venus is in the sign of its esoteric ruler (Gemini) but Jupiter is retrograde and debilitated by sign so there is some tension there. Still it’s a minor part of this configuration, especially in light of the Sun / Venus conjunction that becomes exact on Monday.

This is a superior conjunction, meaning that Venus will shift from morning star (rising ahead of the Sun) to evening star (setting after the Sun) in the coming days. This is also referred to as Venus Hesperus and is associated with a more thoughtful, strategic relationship style. Where the more star is associated with passion, impulse and “following your heart,” the evening star Venus is more “think first and act later” — at least in matters of the heart.

On Tuesday this conjunction squares the North and South Nodes and inconjuncts Pluto. The square to the Nodes is also called “at the bendings,” which can indicate a period of crises that emphasizes on the concept of fate. The inconjunct to Pluto forces us to re-evaluate our relationship with deep-seated fears and desires and find a way to reconcile them with our personal realities.

As the Venus represents love, beauty and personal values, this can translate as a turning point in relationship, particularly those that are karmic in nature. And as the Sun is tied to ego, will, self-expression and identity, it can manifest as a crisis in consciousness.

Mercury opposes a retrograde Mars — and sextiles Chiron — on Thursday. Mercury in Taurus is known for being calm, but put it in a hard aspect to Mars — even though Mars is dignified in its current placement (Scorpio) and fireworks are likely to erupt.

You may find that people are more argumentative than usual and more investing in being right. They can be abrasive and even belligerent. You may wonder whether it’s worth it trying to engage someone who doesn’t want to hear what you have to say. It may be best to just them rant rather than trying to poke holes in their theories.

This aspect can also be very distractible, especially with Mars in retrograde. It can make it hard to think, to fall asleep or to complete tasks that require you to focus. You may find yourself being pulled in several different directions mentally — and the good news is that allowing it to happen can bring in flashes of genius and insight that wouldn’t have been available to you otherwise.

The sextile to Chiron can not only soften some of that Martian frustration and irritability , it can make it easier for you to convey your views to those who may be resistant to them at first. It eases the transition between dissent and acceptance, making it not only okay to disagree but opening up the pathways toward acceptance and understanding.

The grand cross that was in such tight orb at the beginning of the week has loosened up somewhat by week’s end. The Sun and Venus have separated enough to have escaped to confines of Saturn / Neptune and Jupiter. That’s the good news. The not so good news is that now it becomes what’s known as a t-square, with Saturn at the apex, squaring Jupiter and Neptune, which are in opposition to one another.

By Saturday, the Moon joins in (conjuncting Jupiter and — widely — the North Node).T-squares do two things: they place emphasis on the focal planet (in this case Saturn), and they force integration of the planets that square Saturn and oppose one another (in this case Jupiter / Moon and Neptune).

With Saturn at the apex you may find yourself struggling against what may seem like insurmountable odds. But the Moon/Jupiter and Neptune opposition says you can not only rise above all that but can strive for peace, hope and inspiration in the process.