We start the week on Sunday with a 1st quarter Moon in Libra, which opposes Venus, trines Mars and conjuncts Jupiter before the day is through. This Moon is known for fairness and objectivity; it strives for balance and harmony at all times.

The opposition to Venus (in Aries) in the early morning hours can bring some unsavory emotions into the mix, but the other two transits are both very positive. The trine to Mars is energetic and motivational, while the conjunction to Jupiter is expansive, optimistic and inspirational.

Moving onto Monday, that same Libra Moon makes a couple stressful aspects — a square to Pluto and an opposition to Mercury and Uranus, before it trines Saturn later in the day. While these lunar aspects are fleeting, they can be powerful, and can see you going through an entire gamut of emotional changes during the day.

The square to Pluto and opposition to Uranus / Mercury can be combative and confrontational. It can see dealing with someone who is paranoid and irrational. It can manifest as erratic behavior, jumping to conclusions and impulsivity.

The good news is that Saturn trines this moon at the end, just as the Sun trines Pluto — in the early morning hours on Tuesday. The Sun / Pluto trine is all about harnessing your personal power and channeling it in productive / transformative ways.

It’s excellent for business and financial matters since both of these planets are in Earth signs. It can also be used to make positive changes in yourself — as in how you wish to present yourself to the outer world and how you want to be perceived. 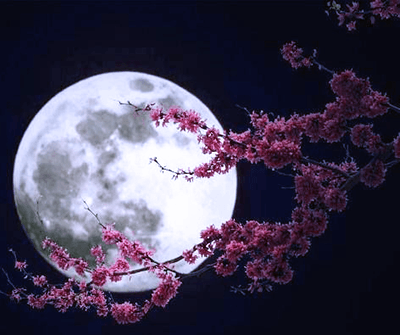 Wednesday’s Full Moon takes place at 9:42 pm UT (or 5:42 pm EDT), at 20° Scorpio 24″. This is known as the Full Flower Moon in Native American traditions, a reference to the abundance of flowers that bloom during the month of May.

The Sabian Symbol for this degree is: “A soldier derelict in his duty.” This is a powerful symbol that speaks being guided by your convictions and doing “what is right” without regard for consequences or status quo expectations.

It can refer to internal conflicts or moral dilemmas. As Full Moons are said to shine a spotlight on areas in your chart that are affected (by house position and contacts to other planets) you might look to your own natal chart to see where this will play out for you.

In general, the Scorpio Full Moon provides an overview of the progress you’ve made since its New Moon counterpoint back in April. Seeds that were planted then will surely have sprouted; do you need to make adjustments or change your course entirely? Now is the time to think about what you’ve accomplished and where you want to go from here.

Also on Wednesday, Mercury conjuncts Uranus. This transit is great for brainstorming and thinking outside the box. It’s about innovation, progress and change. Radical ideas and flashes of brilliance.

As the higher octave of Mercury, Uranus is also tied to flashes of genius and insight. It’s inventive, progressive and forward thinking. It relates to expressing your own personal opinions (in contrast to Mercury’s penchant for absorbing facts and ideas that have been gathered from other sources).

This combination is also heightened by the fact that Mercury is in mutual reception with Mars in Gemini. It lends an added bit of ingenuity and adaptability that can see you making great strides.

On Thursday, Mercury trines Saturn, just as Mars squares Neptune. The Mercury / Saturn aspect is positive and productive; the Mars / Neptune aspect not so much. With Mercury trine Saturn, we can expect to get a lot accomplished in the workplace. It’s a good time to make plans and to assess progress that’s already been made. This aspect is both incredibly disciplined and productive, so if you want to get something done now is the time to do it.

However Mars square Neptune can throw a wrench into your plans. It can see you feeling confused or distracted. It can manifest as doubting your abilities or questioning other people’s motives. While Mercury / Saturn is focused and rational, Mars / Neptune is ambiguous and prone to flights of fancy. You’ll have to figure out a way to balance these competing energies if you want to get anything done.

There’s a nice Mars trine Jupiter coming in Friday though that can see you getting yourself back on track. This aspect brings with it an abundance of energy and enthusiasm. It inspires us to think about travel, adventure, spirituality, philosophy and higher mind pursuits. It takes us out of our comfort zones and gets us thinking about how the other half lives.

This transit is reinforced by the Moon moving into Sagittarius — the sign Jupiter rules — and forming mostly pleasant aspects throughout the rest of the weekend. Aside from an opposition to Mars (on Saturday) this Sagittarius Moon should see us ending the week on an upbeat, optimistic and very positive note.