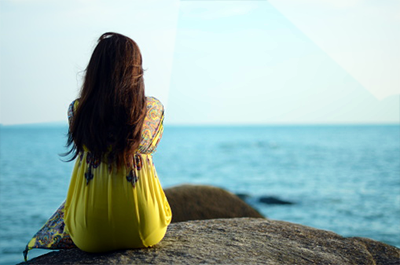 Ask the Tarot: Is That all There Is?

We received the following question from a reader who has questions about her marriage:

My name is Sage (not real name) and I am married and I am constantly struggling to know if I made the right choice in marrying him. I often feel there is more for me or a better match. And while my husband is great, loving devoted and financially supportive I am not sure I can stay for the rest of my life with him and have kids with him…

I am not sure what information you need but I want to know if I am deep down destined to be with someone else or if I have found the person I am meant to be with and I should just live my life with them. Please help me I am a bit of an emotional mess.

It should be noted that Sage did submit birth information for herself and her husband “James,” which has been omitted from this post.

So what can the Tarot tell us about her situation. As always this is simplified version of an actual reading, which would take into account a more comprehensive overview of the question and would probably involve a few different tarot spreads. But for the purposes of this entry, Chrisalis looked at a 4-card spread, drawing from the fantastic Starlight Illuminated Tarot, by Carol Herzer.

The four cards pulled for this reading were: the Hierophant, the Queen of Cups, the Empress and the Tower.

Sage writes that she’s feeling restless and uncertain, and asks: “Is that all there is?” So let’s Ask the Tarot: 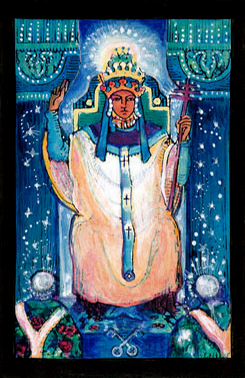 Thanks for contacting us with your questions.

And yes I can see you would be having a bit of confusion as to what you wanted in life and particularly in your marriage as the Hierophant card was the first card to come out in your reading and this card specifically stands for your relationship.

When I pulled it it was set apart from the 3 other cards. If you can imagine them all in a line of 4 cards then the relationship seemed to be somewhat “outside” of yourself and you were not a part of it and may feel as if you are already withdrawing or leaving the relationship on an emotional level.

The Queen of Cups is a woman who feels her emotions strongly and even though you are a Virgo you are looking at your situation in an emotional way alongside that of the card of the Empress which is that of caring for others and also quite possibly caring for yourself.

I suspect this may be because when you think about the future with your husband and having a child then all of the other things which are not working for you within the marriage come up stronger and it throws you off balance and makes you withdraw further from the marriage and question whether you should be in it.

Your husband did not even show up in this line of 4 cards it was all about you and your thoughts, feelings about the marriage… and also thoughts and feeling about your own self.

You seem to already be pulling back from it and asserting yourself as an individual rather than a partner within the marriage and these types of thoughts would only serve to bring up more and more questions within yourself as to what you really want.

I would wait things out for a bit. I suspect there are transits in play here on your astrological chart which Melodie is going to be looking at. 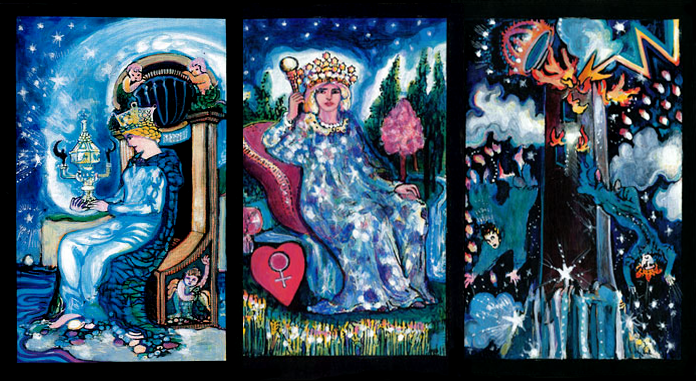 The Tower card suggests there is a bumpy road you are on now but nothing is ever permanent and bumpy roads end. You had such wonderful cards for yourself here.

Both the Queen of Cups and Empress are strong, feminine women and they are also about emotions rather than actions further suggesting you need to explore what is going on within you at the moment rather than changing a situation on the outside.

Indeed, the situation “on the outside” namely that of your marriage was perfectly depicted when the Hierophant card laid itself “apart” from the other 3 cards in this row and showed that whilst you are part of a marriage you are also part of yourself and right now you may find you need to get in touch with yourself to know what to do about the marriage.

I hope this is helpful for you and now I’ll turn it over to Melodie who had some thoughts on yours and your husband’s charts.

Hi Sage.. first of all thanks for including your exact (timed) birth data which in the interest of privacy I will not post the full chart here. But I will highlight what stood out for me, both in your natal chart and in your current transits.

Here’s the portion of the chart with the main players (some planets and points — including Sun and Moon are omitted here): 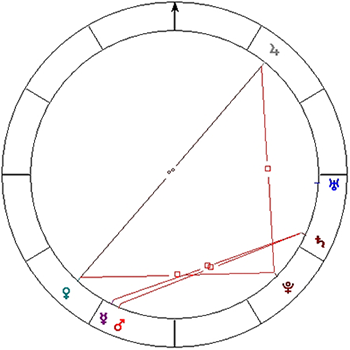 But as an astrologer I have to be careful making those kinds of distinctions, as I’m sure there are numerous examples of people with a similar natal signature who manifest that energy differently. Either way it does imply a strong need for freedom and independence, a desire to “break free: and a tendency toward restlessness in relationship.

The relationship ruler (Jupiter) is in opposition to the romance ruler (Venus), and both of them in hard aspect to Pluto, which emanates from the 5th house — the area related to romance, love affairs, self expression and children. This is the main red and black triangle configuration you can see in the chart diagram on the left.

This natal signature itself reinforces the discontent. It does not say you WILL divorce. it does say however that you will deal with challenges and temptations to break free from your marriage when those natal aspects are triggered.

The other aspect I included here involves your chart ruler (Mercury) which is conjunct Mars and square Saturn. I mainly included this aspect because it not only describes feelings of discontent in general (Mercury and Mars square Saturn) but also because this configuration is being triggered now by the transiting Saturn.

Saturn takes roughly 29 years to go around the Sun one time. When it returns to its natal position, as is the case with you now, it marks a major turning point in our lives.

It’s not only the end one cycle and the beginning of a new one, it’s also a time when we all start weeding out the “dead wood” in our lives in order to prepare for the next chapter. It always brings a sense of clarity (glaring, and often painful) that becomes the catalyst for change.

In your case this transit also pulls in the Mercury/Mars aspect which is likely to emphasize those feelings of discontent. It’s also tied to romance, children, creativity, self-expression (from a solar perspective) and work — as in your calling or your purpose (from a natal perspective).

There’s more going on of course — more than we could get into here. (For example, a Venus transit  that has been hovering over your ascendant for the last week or so and is referenced again in the cards Chris pulled. Note the Venus symbol so prominent in the middle — Empress — card).

But what all the above means, in a nutshell, is that the feelings you’ve expressed are clearly outlined in the transits affecting your chart.

Those transits move on (in your case the Saturn transit will be complete by late October).  But you’re forever changed. You’re going to have to decide if you want to weather out this period of seeing the glass half-full (Saturn) or cut and run.

You’ve said yourself this is a good man and he looks it to me. While his chart absolutely shows a potential right now (Jul/ Aug) for marital crisis, it doesn’t have any of the warning signs (natally) for a bad marriage. We didn’t have a birth time for him, but I do have some ideas based on the tranits that are active in his chart presently.

My recommendation to you is not to make any decisions one way or another for the next 3-4 months. Until this Saturn transit is complete.

And as for the question “Is that all there is?” of course it’s not. There’s going to be a variety of options out there and I don’t believe you’d end up alone. But as for whether there’s something “better”… my sense is that you’d be trading one set of problems (boredom and discontent) for another if you were to decide to leave.

The cards used for the tarot portion of this post come from the Illuminated Tarot series which was self-published by Carol Herzer. Used by generous permission. There are several versions of these recolored Rider-Waite decks, each more beautiful than the last. This card is from her Starlight Illuminated version.

You can read more about the genesis of Carol’s foray into hand-painting and re-colorizing these decks on her site, Soul-Guidance.com. They are also available for purchase directly from Carol. Email her first for details. Please also check out the Soul-Guidance YouTube channel. Thank you Carol!

5 comments on “Ask the Tarot: Is That all There Is?”