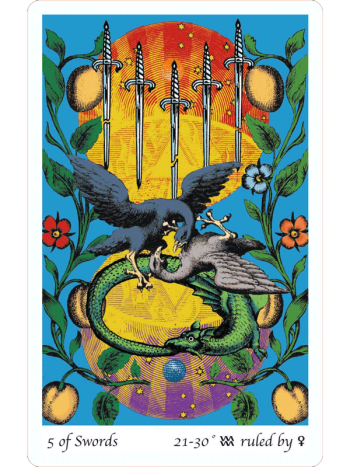 Today you may need to look at all the different aspects of an argument or disagreement and decide your next move. Do you surrender? Finish off your opponent? Turn and walk away? Or do you go back in and clean up the spoils in the hopes that there’s something left to be salvaged?

The Five of Swords is traditionally associated with conflict and turmoil, not seeing eye to eye, and fighting for the sake of fighting. There are elements of ego, pride and “reputation” in the mix — not wanting to give in or to admit to being wrong — these are what keep the conflict alive.

In this version of the card we see a pair of eagles involved in a skirmish, and while one appears to be “winning” at the moment it’s apparent that that could easily change. Five Swords are lined up behind them, three of them broken and two still intact.

If you think about the disagreements in your own life, you’ll see that Ego is almost always to blame. The “death before dishonor” aspect of this archetype is so beautifully rendered here, right down to the Sun and Moon in the background and the Ouroboros (or World Serpent) behind the battling birds.

The astrological decanate (21-30° Aquarius) is the Libra decanate, ruled by Venus. Saturn as the traditional ruler of Aquarius is exalted in Libra, forming an essential dignity. It reinforces the yin/yang and as above so below / as within so without features of this archetype.

Any battle after all is a battle with ourselves, whether we project it outwardly or recognize it as a projection. The Ouroboros behind the two warring eagles reminds us that there is no beginning or end, no conqueror or defender, no winner or loser.

Take a step back and evaluate the spoils of whatever “war” you’e most recently engaged in. Only you can decide what being “right” has cost you and whether it was worth it in the end.

The card used for today’s tarotscope is part of the Tarot of the Holy Light series, designed by Christine Payne-Towler and Michael Dowers. Used by permission. This entire deck is so rich with esoteric symbolism that a single “daily draw” doesn’t even scratch the surface. It is also not a Rider-Waite or Golden Dawn based tarot: it’s what Christine refers to as “Continental Tarot” which she is very well versed in. Although this is not a beginner deck it’s so worth having for the serious student or collector. This deck is also now available for iPhone/iPad and Android devices. Be sure to visit and “like” their Facebook Fan Page.