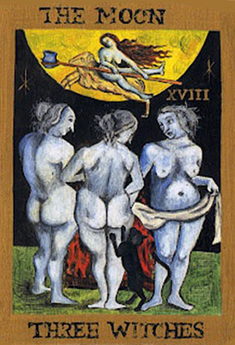 Today you may be struggling with feelings of anxiety over something that just doesn’t seem to be panning out they way you’d planned.

The Moon card represents our unconscious hopes and fears and is loaded with shadow material. This card tells us that things are uncertain, unsettled and unfinished and that the outcome is still very much up the air.

The Moon in this version is portrayed by Shakespeare’s Three Witches, who foretold MacBeth’s fate early on in the tragedy of the same name.

The “Weird Sisters,” (as they were also known) were mysterious, ambiguous and contradictory, much like the Moon in the night sky.

They were also dark, moody, elusive and ever-changing, and it was never quite clear whether they were real or were figments of MacBeth’s imagination, born of his deepest desires.

Sometimes we want something so badly that we convince ourselves it’s real or that it’s meant to be. But there’s usually an undercurrent of fear in that as well. What if I’m being irrational? What if it’s all in my imagination? What if I wake up tomorrow and none of it was real?

“Fair is Foul and Foul is Fair!” cry the sisters, reminding MacBeth that things are not always as they seem. This is the essence of the Moon card, which tells us that all that we desire or long for or fear can be clouded by those very same sentiments.

You can quiet your fears by reminding yourself that the future has not yet been written and that there’s still time to achieve the outcome you desire. You can work on curtailing some of the Moon’s more harrowing elements (doubt, fear, suspicion and paranoia) and tap into its more uplifting aspects (intuition, perception, sensitivity and discernment) instead.

The deck used for this month’s tarotscope from the fantastic Shakespeare Oracle written by A. Bronwyn Llewellyn and illustrated by Cynthia von Buhler. Published by Fair Winds Press.