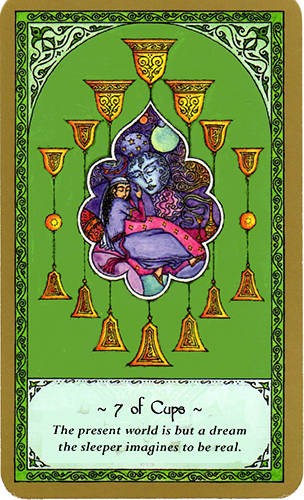 Today you may need to step back and work on getting some clarity over choices that have been troubling you.

You may feel the need to make an important decision and be consumed with worry over potentially making the wrong one.

The Seven of Cups — like all sevens — refers to a dilemma that is not easily (and never ideally) resolved. Because we’re talking Cups here, that dilemma is most likely emotional — or love and relationship oriented.

Your views may be clouded by intrusive thoughts or temptations that are not in keeping with your own moral principles.You could also have too many options available to you and be struggling with choosing one over the others.

In this rendition of the card, we see a figure sleeping with all of his dream symbols floating in the ethers above him. The Sun, Moon, Stars and Planets are all there — along with a hookah and tiny chalice at his bed-side. Seven golden chalices (which invert to seven golden bells) frame him in the card.

The Rumi quote: “The present world is but a dream the sleeper imagines to be real” invites a more thorough investigation of the age-old query over what is real and what is just an illusion.

There are opportunities before you, but you must first decide whether they’re worth even pursuing. There are “pie-in-the-sky” elements to the choices presented in this card — as well as the possibility of waking up and discovering that none of it is real. For this reason your best course of action is to hold off on making any important decisions, at least until the smoke clears.

The card used for today’s tarotscope — Nine of Cups — is part of the Rumi Tarot series, by Nigel Jackson, who also brought us the Nigel Jackson Tarot, the Medieval Enchantment Tarot, Fortuna’s Wheel Tarot and several widely-acclaimed astrological treatises.

This deck pairs quotes from the Persian poet and Sufi mystic Rumi with the beautiful esoteric imagery Nigel Jackson is so-well known for. Published by Llewellyn, this deck is currently out of print, although some copies are still available on Amazon.