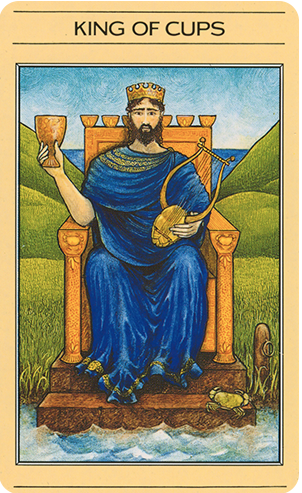 Today is all about getting in touch with your feelings and emotions. As with all of the court cards, the King of Cups may refer to an individual in your life, or it may represent an attitude of mindset that you need to adopt.

In this version of the card, we see the Greek god Orpheus, son of Apollo and Calliope, known as a passionate and loving priest. He sits on golden throne at the edge of the sea, a chalice in one hand and his lyre in the other. A pair of crabs, the symbol for the astrological sign of Cancer, are etched into the armrests, while another crab — this time a living one — emerges from the sea and scuttles onto the base of his throne.

Today’s Moon is in watery Scorpio, and for at least part of the day conjunct Saturn and in trine to both Jupiter and Chiron. The conjunction with Saturn lends an air of authority and discipline, while the trines to Jupiter and Chiron add sensitivity, vulnerability and compassion. What better representative of those energies than Orpheus himself?

Orpheus was a great minstrel whose hauntingly beautiful melodies not only lulled the sleepless dragon to sleep, but gained him entrance into the Underworld to retrieve his beloved Eurydice, after her tragic death. And retrieve her he did, almost making it back to the entrance before he defied the god Hades’ one condition: “Don’t look back.”

Moments before Orpheus and Eurydice reached the world of the living, his curiosity got the best of him and he glanced back over his shoulder. In doing so he witnessed his bride fading into the darkness, thus losing her again. This time for good.

Orpheus’ anguish and despair led to him spending the rest of his days as a priest and healer, tending to the suffering of others. Although embracing these qualities is an important feature of understanding the message behind the King of Cups, there’s also a moral to this story that anyone delving into the world of emotions would be wise to heed.

The condition leveled at Orpheus before he lost his beloved Eurydice forever. Get in touch with your feelings and embrace them as a necessary step to understanding your motivations, but leave the past behind you where it belongs. In other words: “don’t look back. ”

Today’s card — King of Cups — comes from the Mythic Tarot by Juliet Sharman-Burke and Liz Greene, illustrated by Tricia Newell, distributed by U.S. Games. This deck can also be downloaded as an app for IPhone, IPad and Android devices through the Fool’s Dog website.