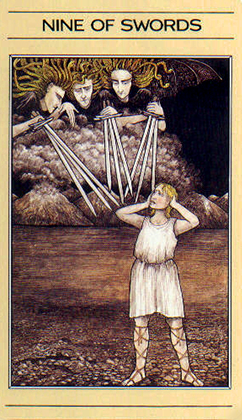 You may be tossing and turning in your sleep this month; stressing over concerns that seem to have no resolution.

This card speaks of our tendencies to magnify problems, often making them out to be worse than they are.

You’ll need to learn to step back from intrusive thoughts and fears before they escalate into full-on panic. This doesn’t mean you should ignore your problems: that may be what’s gotten you into your predicament in the first place.

You’ll have to confront your fears head-on if you’re ever going to conquer them. You may have to look at where you’ve made mountains out of molehills or have been your own worst enemy.

You may have contributed to your problems, as responsibilities that have been avoided could very well be coming back to haunt you now. But it’s also important to forgive yourself for past mistakes and work on putting them behind you. 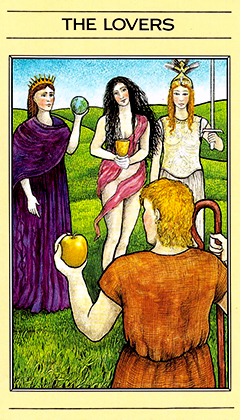 You’ll have some important decisions to make this month regarding your relationships.

You could be faced with a difficult choice between two people or between “love” and something else (career, money, family, independence, etc.). Or you may be trying to figure out where someone fits in: are they friends or are they lovers?

Are you ready to take a romance to the next level or are you thinking of leaving it behind?

These are the types of questions you’ll be asking yourself this month.

Each scenario presents advantages and disadvantages. And there’s also often a third party in the equation, making things all the more complicated.

Relationships are tricky in general: whether you’re a part of a triangle or on the outside looking in, you’re going to have to take a stand this month and then live with the consequences. 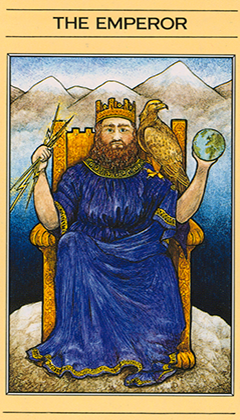 This month you’re going to feel like you’re on top of the world, with unlimited professional possibilities.

The Emperor (depicted by the Greek god Zeus in this deck) sits on his throne in the mountain tops looking down over all he’s achieved.

You can look forward to a similar sense of accomplishment, as the sky is the limit for you this month.

This card symbolizes worldly acclaim and ambition. No matter how high your own personal mountain top, you can know that there are possibilities available to you if you only you set your sights on pursuing them.

Hard work, perseverance and determination are all required: nothing will come to you through sheer luck or wishful thinking.

But when you’re at one with the Universe, nothing can stand in your way. 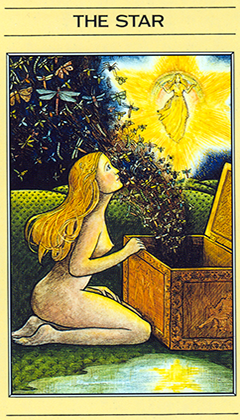 The Star card in this deck is portrayed by the Greek goddess Pandora, whose faith, trust and curiosity caused her to unleash unspeakable miseries onto all of mankind.

There’s no malice in this card. Instead there’s a child-like innocence and naivety that overshadow any judgment.

Even so, there are consequences to seeing only the brighter side of life while ignoring the dangers that surround you.

This is a card of hope. It reflects the ability to look past minor setbacks and focus instead on the future.

There’s not always a solid basis to the “hope” that springs forth from this archetype. But as you can see Pandora ignores the gnats and pesky insects the swarm around her and focus only on the angel.

You can know that despite all the disappointment and disillusionment you’ve experienced in the past, that faith, hope and trust in the Universe will always see you through. 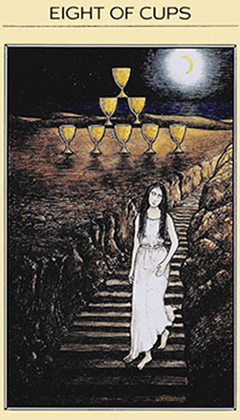 This month you’ll be taking a hard look and what (and whom) in your life you may have to decide to put behind you.

Here we see the goddess Persephone walking empty-handed into the unknown. Eight golden vessels stand upright behind her, reflecting the difficulties associated with walking away from something that had been fulfilling in the past.

This should be a period of cleaning out closets, weeding unhealthy relationships from your life and letting go of outdated beliefs and fears. It’s cathartic in the sense that it forces you to look at what’s no longer working for you and to do something about it.

There is a natural sense of purpose associated with this card, even if it brings with it some sadness or loneliness.

You realize that it’s only temporary, and that you’ll have to leave certain things behind if you want to reach the blessings on the other side. 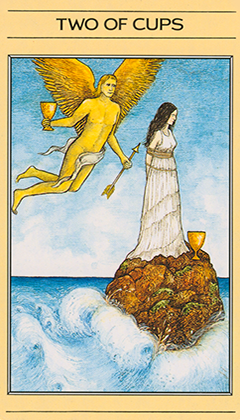 Love sneaks up on your when you least expect it this month. This can take on many forms: from a brand new romance to reconnecting with a lover from the past to a renewed passion in an existing relationship.

This card represents more than just attraction, affection and romance. It also speaks of the need for balance and harmony, for give and take, and for meeting others half way.

Questions to ask yourself include whether you’re seeing the person you’ve set your sights on clearly or if you’re just so in love with “love” that you ignore important signs.

There’s also an “unrequited love” potential with this card, as in being the recipient of another’s unwanted affections, or of having your heart set on someone who doesn’t even know you exist.

The overall message here is one of union and partnership. Your relationships provide you with an opportunity to join forces with another, and in doing so learn more about yourself. 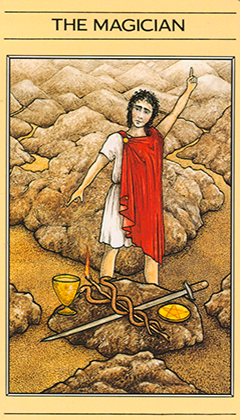 This month you’ll be honing your skills and talents to perfection, so that they can be put to practical use.

Although the Magician is full of lofty ideas and goals, they don’t amount to much if they can’t be brought down to earth and made manifest. This is your goal this month: to take all you think and know and make it accessible to others in a useful way.

In this deck, Hermes — patron god of travelers, thieves, messengers and magicians — is depicted as the Magician, pointing upwards toward the heavens and downwards toward the earth.

The four elements (fire, earth, air and water) are at his feet, symbolizing the four suits of the tarot. It’s clear that he has all he needs right there at his disposal, if only he puts them to use.

You’ll want to set about accomplishing something tangible this month. Know that all of your resources are right there at your fingertips, and will only need to be accessed in order to create something “magic.” 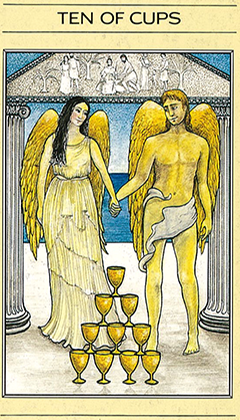 You may be seeking your “happily ever after” this month in the form of a marriage or soul-mate type relationship. The symbolism depicted in this card certainly suggests this type of union. But with all tens there’s an implied ending or culmination, which forces you to look at the “now what?” aspects of your relationship.

Is it possible to be loved too much or to have so much affection for another that you feel like you’re bursting at the seams? This is the basis of the state of limerence, which is an almost obsessive sense of longing and infatuation — the kind that hurts as much when you’re together as it does when you’re apart.

Falling in love is a beautiful thing. And as long as you’ve got your feet on the ground, it can last a lifetime. But this card also speaks of the capacity to love someone so desperately that you lose track of where you end and they begin.

Your goal this month should be to temper your desires to merge with another with the enough independence and autonomy to sustain each party separately. 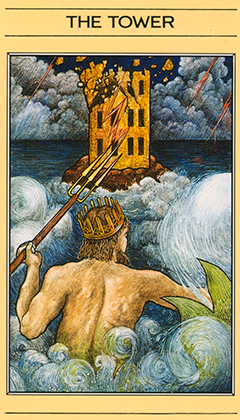 You may feel like you’re standing back helplessly this month and watching all that you’ve built come crashing down around you.

There are elements of “fate” in this card as in seeing events unfold that seem completely outside of your control. Chaos, panic and terror are all depicted here; yet if you look at the image of Poseidon watching from a distance, you can see that he’s alert and observant rather than plunging into the depths of safety (or despair).

Consider how necessary it may be to break away from all that is no longer conducive to growth. You might not have a choice in the matter: if you’re unable (or unwilling) to clear away the past, the Universe may just decide to do it for you.

But also remember that the Universe does not appreciate a vacuum; all that’s washed away will be ultimately replenished.

Take stock of what’s important to you this month vs. what you’ve been needlessly holding onto. It’s time to let go of that which is holding you back as you embark on the next chapter in your life. 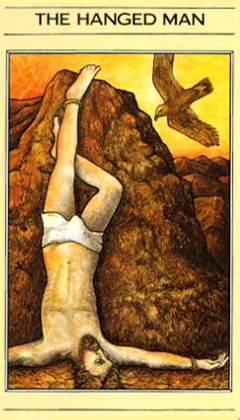 You may be frustrated this month by goals that you’ve been forced to put on hold. The Hanged Man, depicted by the Greek god Prometheus in this deck, represents the potential for sacrifices, obstacles and delays.

This card is often present when plans that have been made hit a road-block or external circumstances interfere with expected results.

Projects are delayed or promotions held up; meetings are cancelled; celebrations are reserved for a later date, and so on.

It may seem that you have no choice in the matter — that the setbacks you experience are completely involuntary. But remember the origin of the word “Prometheus,” which means both foresight and forethought.

As it takes time to formulate ideas into something tangible, it may be a necessary sacrifice that translates later into long-term gains. 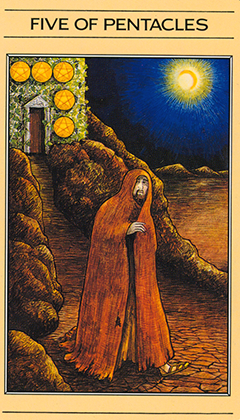 This month you’ll have to think about your relationship with money. This includes not only your spending habits, but also how you go about making, saving, giving and investing it.

This card depicts a disgraced and shameful Daedus fleeing under the cloak of darkness from his workshop.

There are questions about consequences and values, about what is truly important, and about what each of us is willing to sacrifice in the name of success.

If you’re having a rough go of it financially, being turned away (or turning others away who ask for help) it’s time to take a look at all that you hold sacred.

Remember that money is called “currency” for a reason. It needs to flow or will dry up like a drought-starved riverbed. You may have to unleash your generous spirit, even if it feels like a risk.

Trust that all you give out comes back to you ten-fold and keep that in mind when you’re deciding which side of that workshop you want to end up on. 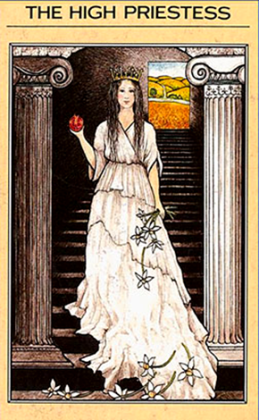 Here we meet Persephone, again — although at this stage she’s transformed from the frightened and lonely girl descending into the darkness of the Underworld and has now assumed her rightful position as Queen.

She stands between two pillars (one black and one white) with a pomegranate in one hand and narcissus flowers in the other. Each of the these symbols reflect important stages in her journey, as well as the dual forces of nature implicit in this card.

Profound psychic impressions — in dreams or in synchronistic events that occur in your day-to-day life — are very common with this card. There’s a renewed connection between the inner and outer worlds that’s impossible to deny.

There’s an awakening of psychic senses and an uncanny ability to tap into the unknown.

There’s no cause for alarm here though: as with Persephone venturing into the Underworld, you’ll find that at the end of this journey, only riches abound.

The deck used for this month’s TarotScope is the Mythic Tarot by Juliet Sharman-Burke and Liz Greene, illustrated by Tricia Newell and distributed by U.S. Games. This deck can also be downloaded as an app for IPhone, IPad and Android devices through the Fool’s Dog website. >Don’t forget to check out this month’s Horoscope too!\
Tagged with: 10 of cups, 2 of cups, 5 of pentacles, 8 of cups, 9 of swords, astrology, fools dog, horoscopes, mythic tarot, pisces, tarot, tarotscopes, the emperor, the hanged man, the high priestess, the lovers, the magician, the star, the tower, u.s. games
Posted in: Melodie, Monthly Tarot Scopes, Tarot, Tarot Scopes