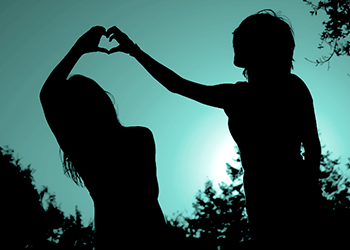 Ask the Tarot: Second Time Around

A client wants to know about a relationship that ended a few years back. It started, faltered and then fizzled out over the course of a year, without ever fully developing into the serious, committed relationship that my client was interested in.

Since January, their relationship has been “back on” again, after several different transitions (from periods of not speaking at all to attempts to maintain the connection as a friendship only, with a few ‘casual’ hookups in between).

Now though things seem to be moving forward again. And my client — Melissa — is curious about how this plays out in their cards and charts.

She’s understandably hesitant, but at the same time hopeful. So her question is whether or not the current astrological transits — and the cards associated with them — are better aligned at this time to signal a happier and more emotionally fulfilling outcome.

It should be noted that they’re back at that “where do we go from here” crossroads and my client (Melissa*) is wondering what the prospects are for their future. So let’s Ask the Tarot:

The cards used for this entry comes from the Shadowscapes Tarot by Stephanie Pui-Mun Law (artist) and Barbara Moore (author).

This is a simple 3-card relationship spread that can be used to look at the situation at hand (center card) and each person involved (left and right cards). The first spread looks at the relationship as things stood the first go-around and we’ll do another spread later to see what’s going on in round two.

But for now lets look at these three cards and see what they have to say:

Card one (on the right), representing Jackie — the woman Melissa is asking about, is the 9 of Pentacles.

Card two (center card), representing the relationship itself, is the 3 of Swords.

Card three (on the left), representing Melissa, is the 7 of Wands. 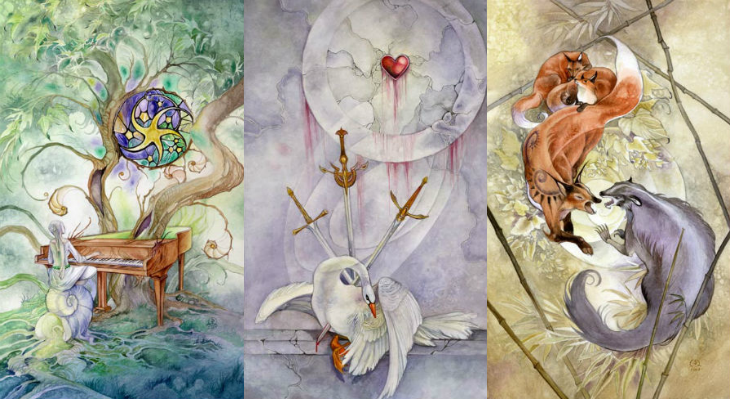 My first though in looking at this is that the cards are showing us not just who each of you are, but what caused the relationship to end in the first place. We can see that it ended and that it was a painful ending, courtesy of the 3 of Swords dead center.

Most people know this card even if they don’t know anything about the Tarot. It’s the card that in many decks is represented by three swords piercing a heart and dripping blood. You can’t get much more graphic than that.There’s a similar representation here, only it’s a Swan that’s been stabbed, perhaps taking his final breaths before he plummets from the crumbling ledge on which he’s perched.

I wasn’t sure what to make of the 9 of Pentacles when I looked at this at first. But in reviewing Jackie’s chart and with the little bit of background you told me in your email. I realize now it’s focusing on that side of her that appreciates the finer things in life and may have struggled with her opinion that you weren’t on the same page.

There is sometimes a bit of snobbery associated with this card, even though the intentions are honorable and the ideals are lofty. This is someone who takes pride in the efforts she’s made to get where she is today, and doesn’t see any reason that others can’t aspire to those same goals.

As for you Melissa, the 7 of Wands can be a bit defensive. It represent someone who’s no stranger to strife and who’s probably in the midst of a conflict right now (or right then, in this case). Notice the fox protecting her kits from the badger. She’s got an awful lot of fight left in her and is not about to back down.

You may also feel like you’re “chasing your tail” in this card. Going round in circles and not getting anywhere. There’s a sense of fighting for something that’s just going to wear you down in the process.

It appears to me that Jackie sensed you were in the midst of some crisis and didn’t want that to cross over into her serene and comfortable existence. She may have also sensed that you were struggling with yourself during that time, as the 7 of wands can refer to internal or self-created conflicts.

I did notice an interesting astrological “hit” at the time the two of you split up. But a little background on this first:

One of the things that jumped out at me instantly when looking at your natal charts is an almost exact conjunction between your natal Venuses. Venus, in case you were not aware, is the “love” planet. This conjunction is played out again in the composite (relationship) chart. The Sabian symbol for this degree (22 ° Capricorn) is: “A general accepting defeat gracefully.” I feel this is precisely what happened when Jackie pulled away the first time. You let her go without chasing after her, and I feel that if you had you’d have sent the balance described above further out of sync and would not have been given the chance to reconnect as you have this time.

I’ve noticed that there’s often an age difference between love interests when Venus in Capricorn is involved. And I feel it is all the more significant in your case — despite the 8 years that passed between your births — Venus synchronistically appears at the same degree. From a karmic perspective, this suggests a past life connection where you were lovers, sisters, best friends etc., and this dynamic is repeated again in this lifetime. Do you pick up this time around where you left off? Not necessarily. My opinion is that there is unfinished business though; and that this Venus tie acts as a magnet to bring you back together.

When the two of you broke up the first time, Saturn had just stationed at 22 ° Libra, in exact square to your Venus, her Venus and the composite Venus.  This is not only one of the most classic “breakup” transits there are (right up there with Uranus / Venus and Pluto / Venus transits) but it also drove home the sense of sorrow and futility that you described in your email.

So what happens now? Using this same format to look at the current situation I pulled the following: 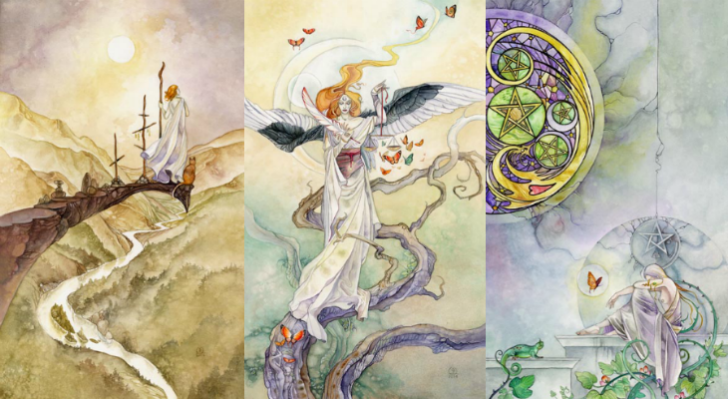 Here we have Jackie in a different state of mind. The Three of Wands speaks of taking risks and striking out on a new adventure and moving away from what has felt comfortable and routine. This seems to fit the current scenario pretty well. It’s a good card in this context; it tells us she’s not only willing to take a chance this time but is open to expanding her horizons within the context of her relationship interests. I think of the Three of Wands as stepping outside the box and while I would say the two of you are more alike than you know. it’s reassuring to see that she’s put her impression of your being on different paths to rest.

The next card, the Justice card, offers more confirmation that the two of you are back in sync. The Justice card is all about achieving balance and harmony. It refers to weighing options and making a decision based on both head (the feather in this card) and heart (the butterflies).

The last card, which represents you Melissa, is not an easy card, It describes some residual fears and memories of being “not good enough” or left out. But if you look at this within the framework of the spread as a whole you can see that these fears are yours alone, and not something she’s projecting onto you.

It seems that this time around she’s up for the challenge. And she probably doesn’t see it as a challenge at all — look at her standing defiantly at the edge of that out-cropping. Does she look afraid to you?

This spread is telling you to let go of your fears. Know that she has given this some thought and has weighed the pros and cons (the Justice card) and has decided to go for it (Three of Wands). You only have to open your eyes, shake off your doubts and be open to whatever this relationship brings.

There definitely will be ups and downs: there always are. But as far as her feelings and her intentions, I don’t feel you have anything to worry about.

The cards used for this Ask the Tarot entry are from the Shadowscapes Tarot series by Stephanie Pui-Mun Law and Barbara Moore, and can be purchased directly from the Shadowscapes website or through the deck’s publisher, Llewellyn. This deck can also be downloaded as an app for Android, Ipad and Iphone devices through the Fools Dog website. Please also “like” this deck’s Facebook Fan Page!

Check out more ask the tarot entries or visit our Shop

* not their real names