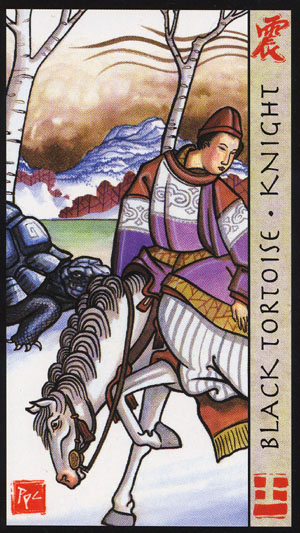 The Black Tortoise Knight — from the beautiful Feng Shui Tarot — is less about action and energy than traditional tarot’s version of the Knight of Wands, and more about discretion and forethought.

Mercury and Mars come together today in quick-witted Gemini. This aspect is known for impulsivity and lightning fast reflexes.

But this Knight of Wands is hesitant. You can see him looking back over his shoulder at something just out of range. He appears tentative and uncertain: maybe he’s worried he’s forgotten something or left someone behind.

His horse appears to be skittish as well. He leans down to sniff at the snow-covered ground, with one wary hoof raised.

Remember that Mercury’s retrograde, even if it is conjuncting Mars. It’s probably not the best time to be going “gung ho” over anything as this Knight of Wands already knows.

You may second guessing earlier decisions or going back to clean up earlier mistakes. Especially those that were made impulsively.

You can get a lot accomplished still. But you should be directing that energy toward reworking goals you’ve already set in motion rather than starting something new. The Mercury Rx / Mars aspect tells you to revisit, review and rethink your goals.

The Black Tortoise Knight (as well as the Black Tortoise itself at the edge of the card) seem to know that there’s a lot of value in taking things slow and steady. Save the passion and energyt that’s normally associated with this card for another day, preferably after Mercury goes direct.

Eileen is a prolific writer who has penned several other tarot books and has joined forces with her son Peter Paul once before on the Connolly Tarot.