Ten of Swords — a New Day is Dawning

“What does not destroy me, makes me stronger.” – Friedrich Nietzsche

What do you do when you come to the end of as arduous journey and find yourself facing a very painful reality?

Perhaps a relationship has run its course, and you’re forced now to finally put it to rest. Or maybe a dream you held onto for far too long is proving itself to be impossible to achieve.

You know that you’ve given it your all — you’ve fought a worthy battle — but you realize it’s time to let it go: once and for all. You just don’t have any more “fight” left in you.

So what do you do? Do you lay down and die, or do you surrender to the knowledge that the Universe has something entirely different in store for you?

Most renditions of this card are somewhat harrowing to look at.

The imagery is often full of scenes of danger, fear, bloodshed and defeat.

A man is beaten down to within an inch of his life, 10 sharp daggers plunged into his back. Or a Christ-figure hangs limp from a war-ravaged cross, a pool of blood collecting at its base.

But if you look closely, the focus — in every single one — is one of conquest, triumph and resurrection. This is the essence of the Ten of Swords.

Out of all the cards in the tarot, this one best describes the process of conceding defeat and letting go of the fight — thus liberating yourself from further heartache and misery. 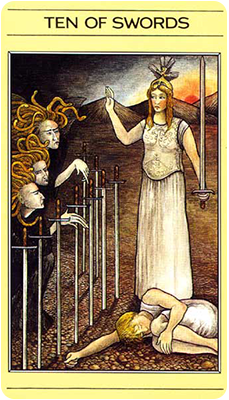 In the Mythic Tarot, we see the goddess Athena intervening on behalf of Orestes, who lays crumpled in a ball at her feet.

He’s been relentlessly chased, taunted and tormented by the furies, avenging his mother’s death.

Orestes is not blameless here. Even though he was acting on direct orders from Apollo, he’s still committed murder.

He’s beaten himself up mercilessly, and is consumed with guilt and shame.

But Athena steps in and intercedes: “enough,” she says. “Enough.”

If you look closely though, you can see that while Orestes lies defeated at her feet, the sun still rises in the background.

Athena stands firm, her sword perfectly balanced in her hand — an indication of her ability to exact justice with fairness and objectivity.

It’s a reminder that even in the midst of being tormented by our demons — and even when we’re forced to admit that we’ve brought it all on ourselves — there comes a time for laying down your sword, giving up the fight and surrendering to forces greater than ourselves. 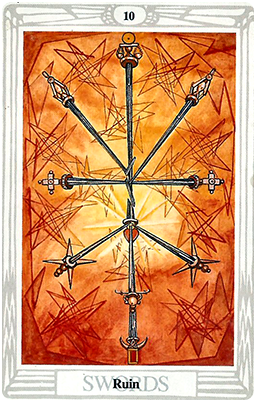 The Thoth deck refers to this card as “Ruin.” It contains 10 swords in the formation of the Sephirot or Tree of Life.

If you look closely,you can see that the middle sword (associated with Tiphareth) is irrevocably broken.

All this takes place across a menacing backdrop of red and gold, with scattered images of chaos and turmoil surrounding the swords.

But you can see that the heart in the center still glows.

This is the essence of the 10 of Swords: after all you’ve been through, and all that you may have lost, there’s still a lot of life left in you, and still a new day ahead.

The battle may be over, and it may have been lost; but it hasn’t been for naught.

Ruin cannot be taken literally in this sense.

Like the Phoenix rising from the ashes, this card says that you too will rise up again and begin anew.

My all-time favorite rendition of this card comes from the Mary-el Tarot.

Here you can see that the focus is on triumph and victory over defeat and surrender.

We see Death — in the form of a skeletal raven — galloping triumphantly atop a bile-colored mare.

A balsamic moon sits high in the background, the raven’s scythe pointed defiantly toward it.

There’s a sense of liberation inherent in the imagery of this card.

The vanquishing of ego; the surrendering of pride; the dissolution of conflict — these are all here.

And what is left after all of these things have been abandoned? Victory, triumph and regeneration.

You may feel alone or unsupported under the authority of this card. But the goal here is not to accept defeat: it’s to find the inner strength needed to conquer that which has driven you to your knees.

The Ten of Swords may feel like an ominous card, no matter which deck you’re looking at. But in the end it’s all about seeing the full picture — from start to finish — and allowing the mistakes you’ve made to be placed firmly in the past.

You may have to concede that you’ve fought a losing battle, but you’ll also want to look at how it’s brought you to where you are today. Are you not now a stronger and better person as a result?

A new day is dawning tomorrow — despite what you may be putting behind you today. This card speaks of liberation, triumph and victory that is yours for the taking.