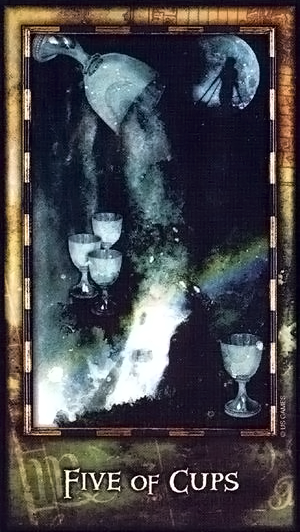 Five of Cups — Everybody Hurts

Today we’re going to be looking at the Five of Cups: arguably one of the most challenging cards in the Tarot. Challenging in the sense that it’s not easy to find much ‘positive’ about this card — which is precisely the point.

The Five of Cups — this version from Timothy Lantz’ wonderful Archeon Tarot — speaks of sadness, disillusionment and discontent, even at times when things are not as bad as they seem.

As someone who speaks every single day with clients who are unhappy in their relationships, it came as no surprise when I pulled this card.

I even wondered if it wasn’t such a good idea to start with something so “negative” right out of the gate. But there are positive aspects to this card too, and important messages—even if they’re not readily apparent. We’ll start with the not so good:

It describes a sense of unhappiness or disillusionment in your current state of affairs, whether you’re involved in a relationship or not.

It can refer to heartbreak, loss, loneliness and dejection. Abandonment. Regret. Feeling dismissed or forgotten. A betrayal, a rejection or a sense of having been “used.” 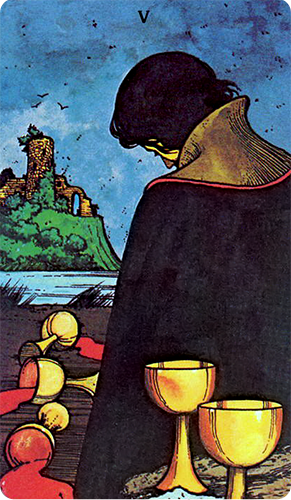 ine goblets, three of which have overturned and spilled their contents onto the ground.

He’s so caught up on what he’s lost that he doesn’t even notice the two full goblets behind him.

This is a common theme in the many decks: seeing the glass as half empty and mourning what’s been lost rather than considering what can still be recovered.

Most decks in fact show at least some of the cups upturned, wine spilling from them as the cups that remain standing are neither seen to be empty or full.

The Mythic Tarot shows the Greek god Eros fleeing from Psyche, who’s betrayed him by attempting to reveal his identity.

In this deck only one cup remains upright, but the message is clear.

Much has been lost; much damage has been done.

The combination of hurt, regret and longing are all depicted in this card.

There’s a sense of finality here too. Not only have all but one of the cups been spilled, but all that’s been done cannot now be undone. 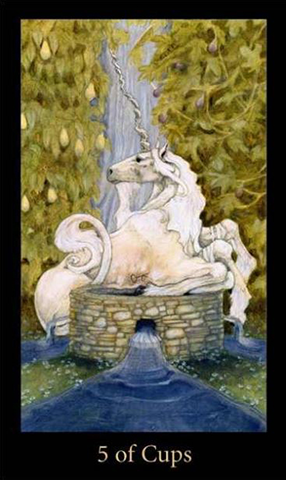 One of my favorite representations of the 5 of Cups comes from the Mary-el Tarot, designed my Marie White.

The imagery is rich in esoteric symbolism.

In her version we see a mythical Unicorn seated atop an old-fashioned wishing well. At first glance it looks like something you’d expect to come across in a fairy-tale.

But if you look closer, you can see that the Unicorn is not seated at all. He’s trapped in the well and has been hobbled, immobilized by his unfortunate circumstances.

The water flowing from the sides of the well has slowed down to a trickle.

He looks away from the set of withering vines on the left and toward those that are lush and plentiful on the right.

The skeleton key symbol on his torso is reminiscent of the astrological glyph used for Greek Mythology’s wounded healer, Chiron.

How might this imagery apply to you? And what can you learn from the circumstances that make this card now relevant in your life?

The Five of Cups can refer to heart-ache, disillusionment and lost love. You could be stuck in rut, reeling from a rejection or coming to terms with a relationship that was never meant to be.

You may also—just like the Unicorn in this card—be refusing to see what no longer sustains you. There is as much danger in not learning from your mistakes as there is in focusing only on what might be. 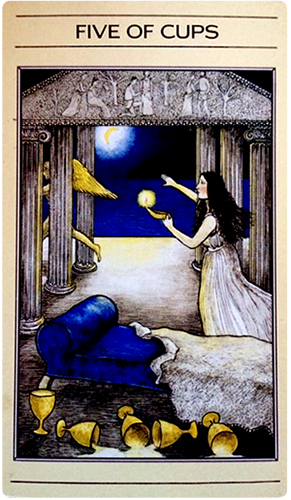 But there are positive aspects of this card as well. There are messages to be unraveled and lessons to be learned. Perhaps the “wounded healer” aspect provides you with an insider’s understanding of what it’s like to hurt, to be alone, and to be denied the very thing you’ve so desperately wanted.

Your heartache becomes a powerful conduit for healing. It can also become a gift that you pass onto others: the gift of empathy. Your own experiences lead to a deeper understanding of what others may be dealing with, and can translate into compassion, understanding, forgiveness and unconditional love.

If you’re in a relationship now, ask yourself whether you’re happy with where things are headed? Are you seeing things clearly or are you too focused on what’s wrong to consider what just might be right? You may have to face some very painful realities and make some very difficult decisions.

You might have to see where what started out as a “magical union” is now developing cracks. You could feel stuck or trapped, or maybe the flow of energy between you and your partner has slowed way down. These are all issues you’ll have to look at before you determine your next course of action.

If you’re not currently involved, chances are good that you’re still healing from a recent loss. You may be mourning a relationship’s demise, or you could be licking your wounds over a painful rejection. Either way, you could benefit from seeing the glass as half full this time and being willing to get back out there and drink from it.

Five of Cups — Everybody Hurts

4 comments on “Five of Cups — Everybody Hurts”