Venus — the planet associated with love, romance, beauty, money, material possessions and personal values — will be retrograde from December 21st until January 31, 2014 (or February 1, 2014 in some parts of the world).

From an astrological perspective, retrogrades motivate us to review, revisit, refine and resolve challenges that are holding us back from progressing in the area related to the planet involved.

No matter where the cycle starts though — and this is really just a matter of preference — it completes 5 of these in an 8-year period, concluding when it returns to its point of origin.

The inferior conjunction begins in the middle of the retrograde cycle, and is followed about 10 days later by its heliacal rising. This is the point where Venus is far enough away from its conjunction to the Sun to be visible as it rises before it. This is referred to as Venus Lucifer (the “Light Bearer”). 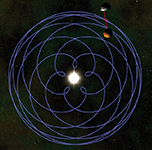 The Sacred Geometry of Venus: Here’s what Venus’ synodic cycle looks like from a Sun-centered (heliocentric) perspective.

The transits of Venus and the Earth — with Venus retrograding back each time it’s overtaken by the Earth — creates a stunning spirographic pattern that repeats itself indefinitely.

This application is an interactive depiction of this phenomenon, from all three (Sun, Earth, Venus) vantage points.

Here’s an animated You Tube version of this same geometrical phenomenon:

During its synodic cycle, Venus spends 263 days as a morning star; followed by about 50 days when it’s not visible at all (due to its proximity to the Sun). It then reappears in the evening sky for another 263 days and disappears again for the final 8 days before it rises heliacally and starts all over again.

Because Venus’s synodic period corresponds to the Earth’s orbital period at a ratio of 5:8, this cycle relates itself 5 times over a period of 8 years. This applies to your own natal Sun and Venus relationship as well. This is why — once every 8 years — you will have both as solar return and a Venus return on approximately the same day (around your birthday).

So what about people who were born with these placements? In general — and depending on the sign and house placement and the relationship between Venus and other planets — Venus retrograde natives tend to internalize Venusian principles.

Venus retrograde people don’t naturally function within the parameters of status quo expectations. Those expectations can seem foreign to them. They may feel like they’re on the outside looking in when it comes to relationships. They may be uncomfortable flirting or expressing attraction or playing the social games that seem to come so naturally to others.

This doesn’t mean they’re unlucky in love or incapable of conducting themselves in healthy and happy relationships. What it does mean though is that they internalize the natural Venus functions that are associated with their sign and house placements.

For example, Venus in Aries people tend to be naturally very passionate, dynamic and assertive when it comes to expressing romantic interest. But turn that energy around (via retrograde) and it’s more likely to manifest as shyness, uncertainty or doubt. Why? because the Venus in Aries function — all the confidence, courage and drive — becomes internalized.

That energy is still there, but it’s less evident to those around them because it’s not expressed outwardly. It can manifest as insecurity, inferiority and problems with identity.

Venus Lucifer and Venus Hesperus:  Because Venus never travels more than 48 ° from the Sun, it’s only visible within a few hours before sunrise or after sunset. You never see Venus (or Mercury, for the same reason) at midnight because of this.

Although the morning star and evening star inclinations apply to everyone (not just those born with Venus retrograde), the retrograde adds another layer.

A morning star Venus — that is Venus rising ahead of the Sun in the early hours of the morning, is called Venus Lucifer. This is traditionally a more expressive, spontaneous and instinctual energy.

It can refer to an “act first, worry about the consequences later” approach to love and relationship. Those born with Venus Lucifer tend to dive in head first and lead with their hearts.

An evening star Venus — that is Venus setting after the Sun in the hours just after dusk — is called Venus Hesperus. This is a more hesitant or cautious Venus; it can be seen as more soulful from the perspective of a more disciplined standpoint.

Those born with Venus Hesperus tend to take things more slowly and consider the repercussions of their actions.

As far as Venus’ current position goes — it’s been visible as an evening star since March 2013, and will remain in the evening sky until around the 10th of January, 2014. Its superior conjunction to the Sun occurred then (on March 28th) at 8 ° Aries. 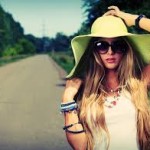 The Sabian symbol for this degree is: A woman’s hat with streamers blown by the east wind.

At that point, Uranus was also conjunct the Sun and Venus — Uranus, the planet most often associated with the famous “hang onto your hat” phrase uttered at the onset of what’s sure to be a bumpy ride.

As with all retrogrades, there are karmic implications. From a Universal perspective, retrogrades describe the challenges that are brought forward as opportunities to resolve past life issues.

They force us to repeat, revisit, resolve and repair past mistakes. When that retrograde planet is Venus, those challenges are typically love and relationship oriented. 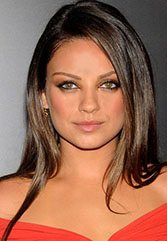 Let’s look at some of the important dates for this particular cycle. First of all, well before Venus went retrograde, it crossed its “shadow point” (which is the degree that it will ultimately retrograde back to before it starts moving forward again) at 14 ° Capricorn. This occurred on November 19th and will station and turn direct at that point again on January 31, 2014. 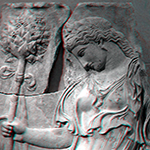 The Sabian symbol for this degree is: An ancient bas-relief carved in granite.

This symbol aptly describes the the nature of a Venus retrograde: from revisiting the past and honoring that which has withstood the test of time to seeing how mistakes that have been made can become “etched in stone” and difficult to change.

The shadow point of any retrograde can lengthen its duration — in this case from 6 weeks (the period Venus is actually retrograde) to almost 10 weeks. 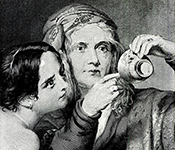 The actual retrograde occurs at 29 ° Capricorn on December 21st.

The Sabian symbol for this degree is: A woman reading tea leaves, another example of imagery that ties in with the concept of Venus retrograde.

We look to the past to understand the future: we attempt to decipher meaning in all that has come before us so that we don’t repeat the same mistakes twice.

As the Sun moves forward and Venus moves backwards (zodiacally), they eventually pass one another. This occurs on January 11th at 22 ° Capricorn. This is the inferior conjunction between the Sun and Venus. 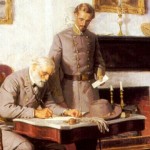 The Sabian Symbol for this degree is: A general accepting defeat gracefully. How fitting that this would by the symbol for the degree at which Venus is occulted by the Sun.

Venus stations and starts moving forward again on January 31, 2014 at 14 ° Capricorn. Although it won’t cross the 29 ° Capricorn point (the “shadow point” referred to above) for almost 5 weeks, it’s at the 14 ° Capricorn point that it turns direct. We touched on the Sabian symbol for this degree above. 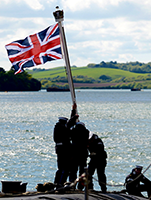 The last significant degree in this cycle is the degree at which Venus rises heliacally. This is 18 ° Capricorn (on Jan 17, 2014).  Incidentally, the Sun on that date will be at the same degree Venus was when it went retrograde (29 ° Capricorn).

The Sabian Symbol for that degree is The Union Jack flies from a new British warship.

This symbol speaks of power, glory, patriotism and pride. In keeping with the idea of Venus as Light Bearer (Lucifer) this symbol is once again very fitting.

So with all this in mind and with Venus on the verge of retrograding now, what can you expect from this cycle?

Depending on your natal Venus (and other planets that may occupy the degrees outlined above, you can expect to be forced to go back and right some wrongs.

This will frequently manifest as someone coming back in from your past  from your past circling back in, as an opportunity to either resolve past conflicts or tie up lose ends. Sometimes that “someone” is from a previous lifetime — and while the timing is not good at all for starting something new, these soul connections are so magnetic and compelling that they’re almost impossible to resist.

Conflicts with family members (or female friends) arisen and force you to deal with them — even though that often means there will be casualties. Family relationships are the most karmic of all.

Some of the negative Venus retrograde attributes, such as jealousy, gluttony, pettiness and greed, are associated with the shadow side of Venus.

Remember that Venus’ natural rotation is retrograde.  This means that the Sun rises in the West and sets in the East on Venus.

We can correlate that astrologically to the Venusian tendency to put relationships first and to want to seek out balance and harmony in relationship.

If you’d like to know where your natal Venus is, or where the current retrograde is transiting through your chart, feel free to drop us a line in the comments section below.

In the coming weeks we’ll be posting two companion pieces to this article. One relates to Venus as a planet in your natal chart and the other relates to transits through the natal chart. Be sure to stop back!