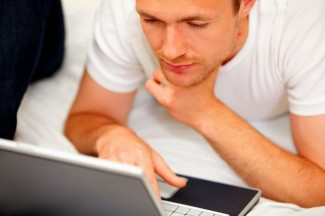 Ask the Tarot: Should I Change Careers?

This installment relates to a client who came in faced with a major and potentially life-altering question: “Should I change careers?” He’s currently working as a software developer for a large firm and already has a bit of an online presence.

But he wanted to know if taking a giant leap of faith and launching his own business (doing something similar but working entirely for himself from home) would be a good move.

While I usually like to pose questions exactly as they’re presented to me, in this instance I rephrased it and asked the following: “What would be the result of Will* quitting his job and launching his own business from home?”

So with that in mind, should Will pursue his dream and launch his own home-based business? Or is he better off just staying where he is for now? Let’s “Ask the Tarot:”

In this case I looked at the three cards as the querent, the question, and the outcome. Here’s the spread:

The deck used for this spread is the Steampunk Tarot deck, by the amazingly talented and prolific artist, Charissa Drengsen. I chose this deck for this “Ask the Tarot” inclusion, because the imagery is so vivid and really seemed to jive with his creative sensibilities.

The Steampunk Tarot is such an amazing deck and I’m grateful for Charissa’s generosity in permitting me to use them. If you would like to purchase her deck (and companion book) visit her Etsy shop!  You can also check out and “like” her Facebook fan page.

Now back to the cards: 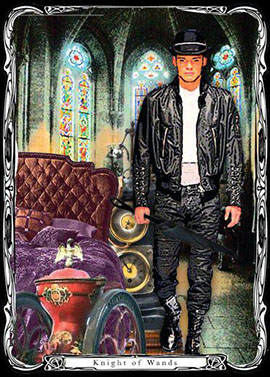 Will (the querent) is by depicted here as the Knight of Wands. This is an excellent card for him in the context of his question; while it doesn’t address the boredom or sense of having gone as far as he can go in his current position, it does nail his passion, motivation and drive.

The Knight of Wands — as a fire sign energy — is all about putting plans into action and manifesting ideals. He’s an avid enthusiast, a visionary, an “idea man” who’s passionate about whatever he puts his mind to.

His energy is infectious. He knows how to make things happen and can rally people around him who long to share in that enthusiasm. He’s a leader and a go-getter. But he can also be restless and changeable; he tends to lose interest rather quickly. This is one of the main dilemmas Will is faced with. He’s excited about striking out on on his own, but also knows himself well enough to know that his interest quickly wanes.

Will likes to strike while the fire is hot. And it’s hot right now — at least as far as his current level of enthusiasm goes. But also realizes he’d have to give up both job and financial security to pursue his goals.

Even in this version of the card we see the Knight with so many projects before him. He’s good at multi-tasking and likes to put his own unique touch on everything he does. But you can bet that some of these projects are half-finished or set aside while he works on whatever strikes his interest today.  Yes he’s creative, driven and passionate, but can be a bit scattered. Perhaps he needs the structure of his current position more than he realizes. 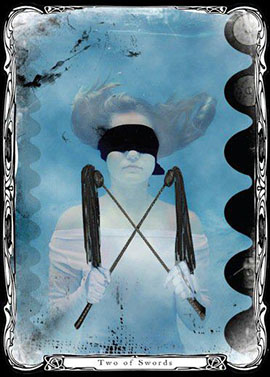 The card describing Will’s question is the Two of Swords. It aptly reflects his indecision and uncertainty with respect to this question.

The Two of Swords refers to opposing ideals or options. Feeling torn or pulled in two different directions. Weighing options. Standing at a cross-roads. Straddling the fence. Feeling stuck or immobilized by fear and uncertainty.

Will is comfortable in his current profession. He’s got a good job and makes a decent wage and feels secure where he’s at right now. But he’s bored and uninspired. He also feels that he’s not progressing or living up to his full potential.

So he’s torn between staying where he’s at: having job security, but feeling like he’s not meeting his potential; or taking a giant leap of faith and giving up that security in order to pursue his dreams.

There’s an element of “holding back” inherent in this card. It speaks of careful observation rather than impulsive action. It’s actually a good counter-balance for the Knight of Wands which is chomping at the bit to make things happen.

But you notice that the figure in this version is wearing a blind-fold which covers both her eyes and ears. She’s also underwater. It’s as if she’s attempting to mitigate distractions so she can think. This is exactly what Will needs to do: find some place quiet where he can be alone with his thoughts and weigh all of the options. 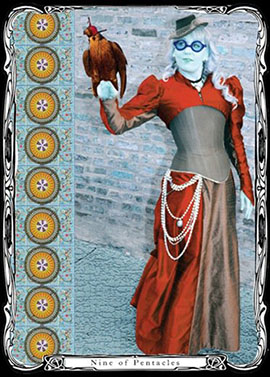 So what is the best course of action here?  Does Will stay where he’s at or does he branch off on his own? Keeping in mind that “should” questions are likely to produce biased results, lets look at his outcome card.

The Nine of Pentacles is the “do what you love and the money will follow” card (in my view). It’s all about going after your dreams with gusto, knowing that you’ll be rewarded.  It represents confidence in yourself and what you have to offer, as well as the motivation and determination to make it manifest.

It’s a card of abundance, prosperity and gratitude. In this version of the card, we see a woman gazing with reverence at the falcon perched on her outstretched hand. Nine golden coins (mini suns or roulette wheels) are aligned on the left border of the card.

This is a card of independence, solitude, comfort and self-containment. It speaks of being where you are through having mastered your desires and turned them into something meaningful.

It’s all about embracing the law of attraction and applying it to your livelihood.

In most decks it does refer to opulence and financial independence. It speaks of being “self-made” and of feeling that you deserve everything you have. No corners have been cut here: you’ve earned your position and can bask in it without guilt or regret.

I told Will that I felt he absolutely could (and should) pursue his dream. But because of his known tendency to get gung-ho about a project only to lose interest in it later, and because of certain astrological transits that line up much more favorably for him down the road, I advised him to hold off until late Summer or early Fall. The “Nine” outcome card suggests September, and this works for him astrologically as well.

This also gives him time to A: build up enough of a nest egg to prepare for any initial set backs; B: network within his industry to line up prospective clients, and C: — most importantly –gauge his own level of motivation ten months down the road.