This week starts on Sunday with Mercury, Venus and Mars all visible in the early morning sky, and a Mars / Pluto trine in Virgo and Capricorn. The Mars / Pluto transit is about being driven and self-empowered. The earth sign trine speaks of funneling that energy into something constructive and productive. It’s about standing strong in your convictions and refusing to be bullied or pushed aside.

Persistence pays off with this transit, especially anything you’re passionate about or that is tied to fulfilling your deepest, most intimate desires. You may be a bit obsessive about pursuing your goals, but the trine makes this process a bit more workable as it brings the Martian drive and determination into the mix.

Venus is debilitated in Virgo (the sign of its Fall) but it’s in mutual reception with Mercury, with each of these planets in the other planet’s ruling sign. The mutual reception can activate the positive energy for both planets, making for enhanced communications, especially where cooperation and diplomacy are concerned.

As Venus and Mars are moving together through Virgo, Venus is also trining Pluto, although this aspect won’t be exact until  Wednesday. This aspect emphasizes the urge to merge and opens us up to meaningful connections with others. Whether these are romantic / sexual in nature or just significant in terms of shared interests and ideals remains to be seen. But this transit brings with it elements of magnetism and charisma so be prepared to make an impact on those you encounter along the way. 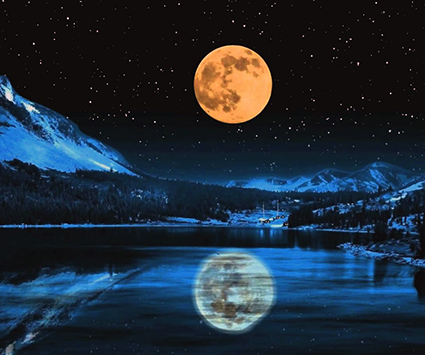 On Thursday, we have a Full Moon at 12° Aries 42″. The October Full Moon is known as the Full Hunter’s Moon in Native American traditions.

This was so named because it occurs during the time when the indigenous people starting hunting, in preparation for winter.

This year it’s also a Harvest Moon, as it is the Full Moon closest to the Autumnal equinox.

Because it’s in Aries — the sign associated with action, energy, motivation and drive — we can see how harnessing this Full Moon’s promise can lead to some very good things.

Also on Thursday, Venus and Mars come together at 18° Virgo. With the two love planets joining together, romantic impulses are emphasized. This aspect represents the urge to merge and can ignite fireworks in the romance department. With these planets  also ruling the Sun in Libra (Venus) and Moon in Aries (Mars), the potential for romantic interludes to be amplified is strong.

On Friday, the Moon conjuncts Uranus and opposes Jupiter, just as Mercury inconjuncts Neptune.  As lunar transits are fleeting, these aspects from the Moon may pass by with little fanfare. Still it’s a high energy aspect (bringing in the opposition between Uranus and Jupiter) which can manifest as emotional outbursts and problems with impulse control.

The Mercury / Neptune inconjunct can see you wasting time on meaningless distractions or getting confused by what should be simple directions. This aspect is all about getting your wires crossed and can manifest as misunderstandings or miscommunications.

Be careful too that you don’t misread people, as in placing your trust in the wrong ones or expecting more from them than they can deliver. Don’t buy into everything you read or hear during this time: if it seems too good to be true it probably is, By the same token you don’t want to let your imagination run away with you and start making assumptions about people that are undeserved.

Take some time to relax over the weekend, especially on Saturday, when the Moon moves into calm, gentle, patient Taurus. We’ve got lots happening next week, with some hard aspects involving the personal planets to Pluto and Saturn, and both Venus and Jupiter changing signs.