This week starts with Pluto going stationary direct on Monday, after having spent the last six months in retrograde motion. It’s been retrograde since April 23rd and will turn retrograde again on April 26th, 2019. As Pluto turns direct again you may see suppressed urges and desires returning to the surface (much like the Roman God for which it is named emerges from the underworld in ancient mythology).

Pluto turning direct forces you to look at those urges in the harsh light of day and decide whether you’re ready to deal with them or push them back below the surface. Obviously the former is preferable as it can mean the difference between life happening to you (and having no control) or taking charge of your destiny and having some say in how it all plays out.

Although Pluto it no longer considered a planet by some astrologers know it as a force to be reckoned with. Especially moving through the equally formidable sign of Capricorn, and intensified by its upcoming square to Mercury, which takes place on Wednesday.

This aspect is associated with intrusive thoughts, anxieties and fears. It can feel like your mind is playing tricks on you, convincing you that something is real based on rudimentary “facts.” You want to be careful not to let your imagination run away with you, lest you find yourself growing increasingly paranoid. This aspect is great for ferreting out hidden information but is not so good at evaluating it objectively. With the Moon conjunct Mars that day you could be in danger of jumping to conclusions, so if you notice yourself getting fixated on something and feeling the urge to act, step back, take a breather and re-evaluate it in a couple days.

On Friday, Venus goes stationary retrograde at 10° Scorpio 49. From an astrological perspective, retrogrades motivate us to review, revisit, refine and resolve challenges that are holding us back from progressing in the area related to the planet involved. 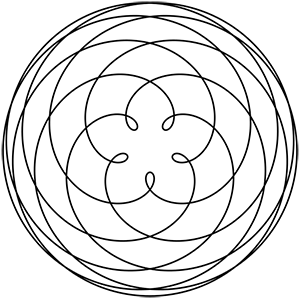 Sacred Geometry: Here’s what Venus’ synodic cycle looks like from a Sun-centered (heliocentric) perspective. The transits of Venus and the Earth — with Venus retrograding back each time it’s overtaken by the Earth — creates a stunning spirographic pattern that repeats itself indefinitely.

During its synodic cycle, Venus spends 263 days as a morning star; followed by about 50 days when it’s not visible at all (due to its proximity to the Sun). It then reappears in the evening sky for another 263 days and disappears again for the final 8 days before it rises heliacally and starts all over again.

Because Venus’ synodic period corresponds to the Earth’s orbital period at a ratio of 5:8, this cycle repeats itself 5 times over a period of 8 years.

This applies to your own natal Sun and Venus relationship as well. This is why — once every 8 years — you will have both a solar return and a Venus return on approximately the same day (around your birthday).

Venus is debilitated in Scorpio, the sign of its detriment. It will remain in Scorpio for the remainder of the month, until it retrogrades back into Libra on the 31st. And, since in the world or retrogrades what goes back must come forward again, it will turn back around and re-enter Scorpio in early December.

Don’t be surprised if old lovers resurface during this time or if you start feeling the urge to reach out to those from your past. If so, keep in mind that this is going to be more about resolving unfinished business or typing up loose ends, and you’re likely to see things change again once Venus goes direct.

The Sun inconjuncts Neptune on Sunday.This aspect can translate to big dreams that are either unrealistic or unreachable. It can also manifest as disillusionment, especially as reality sets in. The solution isn’t to just throw in the towel: it’s to figure out ways to make them happen, which will involve making adjustments. Realistic adjustments. Small goals that lead to bigger goals is a good place to start.