This week starts on Monday with all of the personal planets visible in the night sky and a beautiful crescent (Balsamic) Moon visible in the early morning hours. The Moon in Virgo opposes Chiron, with both at Anaretic degrees.  Anaretic Degrees are said to be karmic in nature. They represent the culmination of past-life experiences through the progression of each sign, and can manifest as a sense of urgency to tie up loose ends and close the door on the past. This aspect reinforces the effects of the more reflective and visionary Balsamic Moon. It’s a time for contemplation and introspection, especially in the early morning hours.

Venus is also now conjunct its own South Node (with both currently at 10 Scorpio). Venus is in detriment in Scorpio, the sign opposite Taurus, which it rules. It will remain in Scorpio for the remainder of the month, until it retrogrades back into Libra on the 31st. Venus on its South Node can bring people into our lives that we’re karmically linked to, and can also remove those who are no longer facilitating our growth. There are elements of fate associated with this aspect. Relationships that start or end during this transit are karmic in nature, so it’s important to treat them as sacred. 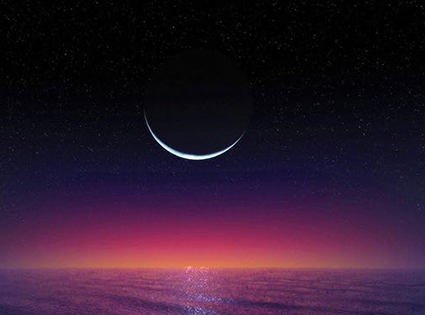 Tuesday’s New Moon takes place at 15 Libra 48. As the New Moon each month brings with it opportunities to start anew, this one, in Libra, the focus is on peace, harmony, diplomacy and balance.

This is the time to offer up to the Universe your intentions for bringing more of these things into your life. The Libra New Moon is also related to romance and beauty, something all of us could use a little more of in our lives.

Also on Tuesday, Mercury inconjuncts Chiron. This aspect  can bring feelings of guilt and regret to the surface.

You may be questioning whether you’ve done enough to help others or whether you’ve said the right things. You may also be more gullible than usual, so be careful you don’t fall prey to some undeserving culprit’s sob story.

Mercury moves into Scorpio on Wednesday. This placement can see you scrutinizing everything to the infinitesimal degree. This is an excellent placement for doing research and analysis, and can also be good for delving into the deepest darkest regions of your own psyche.

What it might not be so good for is communicating with loved ones. You’ll want to get a handle on the tendency to read into everything and see problems where there are none. This placement can be guarded and / or hyper vigilant. It can also be skeptical, suspicious or paranoid.

The good news is that nothing will get past you and no one is going to be able to play you for a fool. But the bad news is that this placement has so much difficulty taking anything at face value that having even a casual conversation can start to feel like walking through a land mine.

Also on Wednesday, Mercury opposes Uranus. This aspect pits the lower and higher octaves of intellect and communications against one another. Pay attention to what you say and how you say it. You don’t want to entertain someone’s attempts to rain on your parade by allowing them to push your buttons or try to pick a fight.

The Mercury / Uranus opposition can be brilliant and so radical that it opens your eyes to new ways of thinking. But it can also be opinionated and argumentative, so steer clear of those who choose to take that route.

On Thursday, Venus squares Mars and Mercury squares the North and South Nodes. The Venus / Mars square can indicate conflicts in your relationships, with the love planet (Venus) and the planet associated with action, energy and aggression (Mars) butting heads. Because Venus is debilitated in Scorpio — and because it’s also retrograde — it can become completely overwhelmed by the square to Mars. You want to try to keep your passions in check, and remember making love is always more fun than making war.

The square between Mercury and the North and South Nodes — referred to by classical astrologers as “at the bendings” — this can indicate a period of crisis with emphasis on the concept of fate. As Mercury represents thoughts, ideas, communications and mental activities, this can translate literally as a crisis in consciousness.