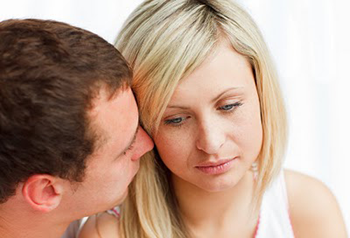 Ask the Tarot: Is it Time to Move on?

My client came to me with a question that I hear all too often. A relationship that’s hit a road block and seems impossible to repair, despite both people still professing love for one another.

In this case though, it’s far more complicated.  Not only are they married, but they have a small child — less than 2 years old.

I want to preface this article with my views on this type of question, as as I explained to her: while I can tell her exactly what I see, in the end I wouldn’t trust such an important decision on the tarot alone and neither should she. I advised her to seek counseling and think long and hard about this before coming to any concrete decision.

A bit of background on their situation. It involves a somewhat recent revelation that not only has he cheated on her, but he’s done so for years (since long before they married) and with a variety of partners. They separated immediately once she learned of his indiscretions, but have continued to talk and he insists that he loves her and wants to make the marriage work.

While he agreed to marital and individual counseling, he’s not upheld his agreement to make other very reasonable changes that she’s requested before she even considers taking him back. He’s stuck on trying to extract a promise from her that she won’t date others until they decide what they’re going to do about the marriage.

So this is where they stand. My client — we’ll call her Emily — has asked if it’s worth holding onto or it’s truly time to move on. So, let’s Ask the Tarot:

In this case I looked at the three cards as the couple, the issue and the outcome. I used the Deviant Moon Tarotby Patrick Valenza (thanks to his kind and generous permission), Here’s the spread: 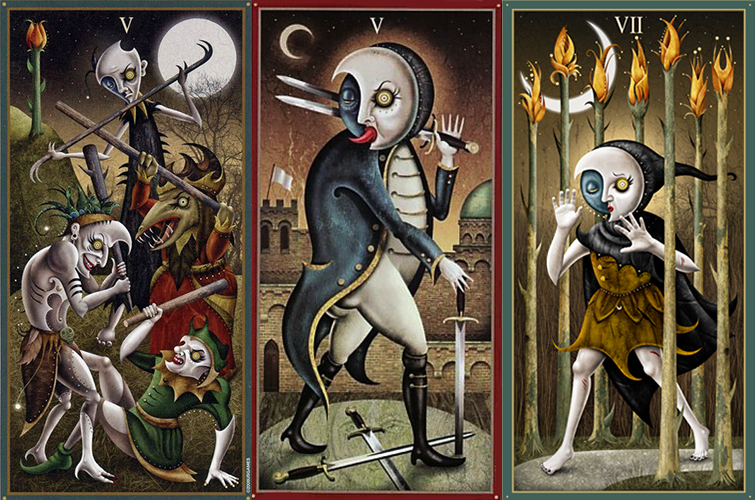 I actually did another spread for Emily as I felt this only told us part of the story. But let’s start with this one, which is made up of the 5 of wands, 5 of swords and 7 of wands. Drawing these three cards does not bode well for her marriage.

The 5 of wands speaks of fighting, bickering, hostility and anger. You can see that the figures in this card are not exactly communicating. They’re savagely attacking one another with no real interest in resolution. Each one just wants to “win.” If you notice though, there are only 4 figures duking it out here — where is the 5th wand? There it stands in the background, planted firmly in the ground and developing a bud which is beginning to bloom.

My interpretation of this — and my recommendation to Emily, is that she step back, get some altitude and not allow herself to be tempted to engage in any battles. Emily doesn’t have to get back into the fray and if she’s smart she’ll see that no good comes of it anyway.

The second card, 5 of swords, is another difficult card. Fives represent conflict in general and in this position (the situation) it’s all about “winning.” There are details and considerations in the back story here that are too personal to get into, but suffice it to say that this card very aptly describes their current state of affairs. Is staying together more about still being deeply in love with one another; or is it more about not losing what’s been developed and acquired over the duration of this marriage? This is a question Emily and her husband (we’ll call him Matt) will have to decide for themselves, but from looks of it, the answer is pretty clear.

The outcome card I feel refers specifically to Emily. This particular card has come up for her repeatedly over many readings. It must in that sense have a special meaning for her. Overall it’s a reminder to stay on track, not lose site of her goals (in this case what she needs out of this relationship or out of life after divorce if she chooses to go that route. I feel she will).

I also did a horary chart for the situation, which I won’t go into here, other than to address how each of them showed up in that chart. A horary chart is a ‘chart of the moment’ — it’s a divination technique for looking at the birth of a question. In this case the question was related to proceeding with a divorce.

The Sabian Symbol for Emily in the horary was: “A flag at half-mast in front of a large public building.” And the Sabian symbol for Matt was: “The purging of the priesthood.” I looked at this as confirmation that the marriage will end in divorce. I read it as the flag at half mast meaning the death of something and a large public building referring to a courthouse. The “purging of the priesthood” refers to the bombshell that was dropped on her when she learned of Matt’s indiscretions. She truly had no idea.

The second spread I did asked what the outcome would be if Emily did proceed with a divorce. Here’s that spread: 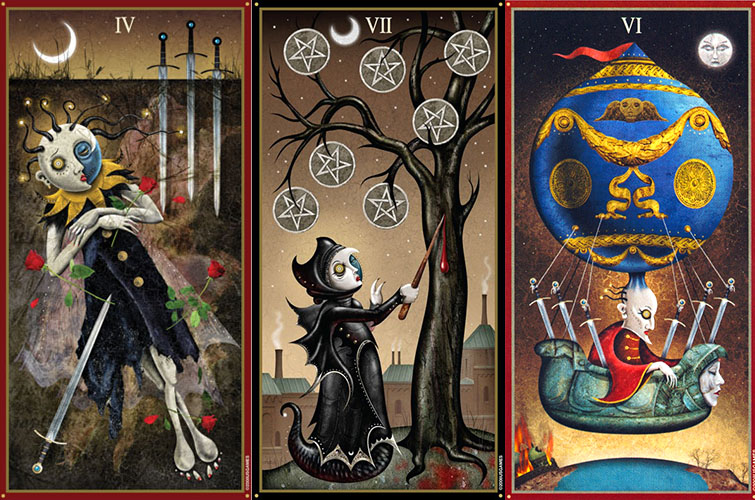 While this is far from ideal, it is a much better spread. It’s made up of the 4 of Swords, 7 of pentacles and 6 of Swords. The four of swords represents inaction, quiet reflection, and “down time.” It refers to a period of recuperation that becomes necessary at the end of an arduous journey. This isn’t about “rest and relaxation:” it’s about taking the time (or having it forced upon you) to regroup and recharge.

The Seven of Pentacles is about holding back until you’re ready to make an important move. it’s about getting your ducks in a row and taking the time to finesse your plans before you act on them — even if you’re tempted to push forward prematurely. In this rendition of the card we see a little witch figure standing before a tree under the light of a New Moon. Perhaps she needs some of the tree’s life essence to cast a spell. But she pokes at it with her wand and draws blood. Even though 7 Pentacles appear on the tree’s limbs above, there are no leaves and no flowers — they too are not quite ripe for the picking. There’s a sense with this card that it’s just not time; she’s just not ready; and there’s still preparation to be done.

While there’s never a perfect time to file for divorce, both of these first two cards confirm that the time is NOT “now.” She probably will decide in the end to cut her losses and move on. As the final card shows, there comes a point of clarity and perspective as she “rises above” it all and moves on.

The Six of Swords is all about transitions, and in most decks (including this one) about leaving something painful behind in an effort to move toward “the light.” Here we see the swords used practically and efficiently in the structure of a hot air balloon that is floating toward a better life. The balloon itself emanates from the woman’s head — perhaps as a reference to the importance of using one’s head to overcome obstacles. The city burns behind her. The face on the front of the vessel is serene, and while the woman herself may be sad, she’s not looking back.

While Emily has some tough decisions to make, and while she may not quite be ready to make them, I feel in the end she will choose to end her marriage. There’s been damage done that can’t be undone, and as frightened as she is about the future, she’s coming to a point of both acceptance and anticipation. The final horary chart I did for her described him (via the Sabian Symbols) as “A soldier derelict in his duties” and her as ” A woman disappointed and disillusioned, courageously facing the future.” I think that says it all.